A good slathering of this pepper foam and the added experience of intense, red-hot pain will make an attacker think twice!

Pepper Foam is a revolutionary defensive pepper spray that combines 10% PEPPER and FOAM to produce a powerful deterrent against attack. The thick Pepper Foam covers an assailant's face, making it difficult to see. When the attacker attempts to wipe away the foam, the pepper is ground into the face and eyes.

Once this is on them and they try to remove it, they will begin to experience an intense burning sensation that gets worse and worse. The only thing they'll want to do is get this stuff off of them. They will have no interest in you any longer and you can run away and call the authorities.

Give Them Something to Do: Like Scream and Howl in Pain
and They Can't Make it Go Away!

Mace® Pepper Foam also includes UV DYE which the police can use to quickly and positively identify the attacker. 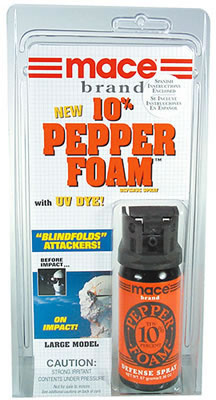 Contrary to popular belief, pepper sprays have been around for a long time. They also come in various forms and kinds, allowing an individual to choose the most suitable type of self-defense weapon for his use.

There are basically three kinds of chemical compounds used for making pepper sprays.

Oleoresin Capsicum It works more as an inflammatory agent than an irritant and your best strategy for using pepper sprays using OC compounds will be to target your attacker's face. Capillaries in your attacker's eyes will dilate, forcing the eyelids to close, and resulting in temporary blindness. OC also renders your attacker choking and coughing while causing affected areas to burn and sting.

Orthochlorobenzalmalonitrile (CS) and Alphachloroacotaphenone (CN) Both these compounds, as opposed to how OC incapacitates attackers, work more as irritants. They target membrane tissues in particular and are also especially effective if you're able to target your attacker's eyes. Besides creating a stinging sensation in the affected area, it can also cause a person to feel disoriented and his eyes to tear profusely.

CS and CN are not, however, as instantaneously effective as OC. It will take approximately five seconds to half a minute before it comes into effect and as such, it's important that you're well-prepared for a counterattack from your opponent the moment you make use of your CS or CN pepper spray. The pepper spray foam on this page is OC and instantly effective.

Studies also show that the effects of these two compounds are somewhat lessened when used against people who are intoxicated, psychotic, on drugs, or incapable to feel pain for some reason. Foam pepper spray affects everyone.

Types of Forms for Pepper Sprays

Not all pepper sprays merely spray out its content. Some pepper sprays release pepper foams. The substance contains 10% pepper. When sprayed on an attacker's face, his first instinct will be to wipe the foam away and in so doing, he will end up grounding pepper into his face and eyes, which will then create a burning sensation.

A UV marking dye is a self-defense weapon spray that is commonly used together with pepper sprays. When sprayed on an attacker, it will create a distinctive mark that will be invisible to the human eye but visible to UV tools. Such marks are highly helpful in identifying and capturing assailants.

Pepper sprays can also differ according to spray patterns, nozzle types, sizes, and concentrations. A bigger device may have greater content but it's also more difficult to hide. The spray pattern is also important as some are effective with accurate aim while others work best in close range.