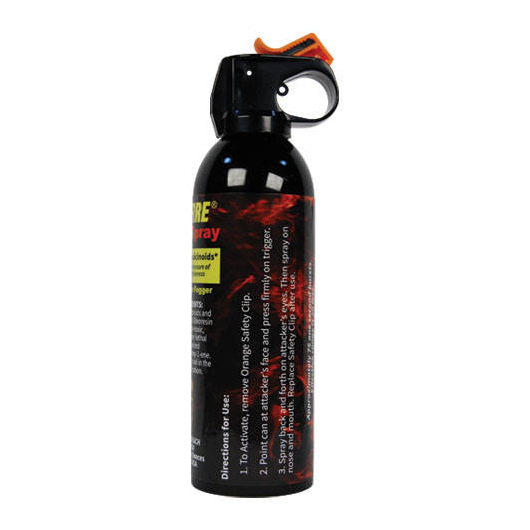 Wildfire is an improved formula that reacts quickly and effectively to disable any assailant. This beefed-up police pepper spray was designed to be the hottest and fastest-acting pepper spray on the market!

These jumbo-sized cans are police size for maximum coverage against multiple attackers. Both the 9 ounce and the 1 pound cans contain the same incapacitating ingredients that will make a person reconsider their life's calling. With enough hotness in one can, you can be sure you won't run out when the time comes.

These Wildfire pepper sprays come in two different actuators for your choosing. The pistol grip handle and the fire master handle. An excellent choice for your RV, camper, vehicle, home, or business.

Security Centers/Guards should have these on hand for crowd control or to break up a fight. Neither fighter will want to continue with anything at all except stopping the intense pain!

In addition to causing an attacker pain, WildFire 10% oleoresin capsicum formula swells the mucous membranes, which makes breathing difficult; and swells the veins in the eyes, causing the eyes to close.

This crowd control sized pepper spray is made from 2,000,000 SHUs (Scoville Heat Units) of raw pepper and these effects can last up to 45 minutes and cause no permanent damage.

Has a UV identifying dye to help aid in the identification of an attacker.

The 1lb model is great for crowd control, military, correction, security, and law enforcement officers. Great for civilian use as well.

One of the tools police officers have in their arsenal is defensive spray. If they run into an uncooperative suspect who doesn't want to listen to their verbal commands, they may have to make them compliant by using their pepper spray.

It is also used for combative or unruly suspects to attempt to settle them down. Once a blast of the cop's spray gets into their eyes and their lungs, the person wants nothing more than to stop the feeling of being on fire.

Officers want the best and fastest acting formula they can get so that they can take control of the situation as quickly as possible. One of the best pepper sprays out there is the Wildfire brand. Wildfire brand pepper spray has been tested against other national brands and the results show that it is the hottest. Independent laboratory test confirms that this formula beats out all other major brands.

What does this mean to you? It means that for your own personal protection, you can have a pepper spray that will stop an assault, an attack, an intruder, or anyone else that is threatening to cause you harm or suffering.

This fast-acting police spray also comes in a variety of sizes you can choose from to best suit your carrying needs. From a small keychain-sized spray to a large 1 lb canister, you’ll be able to find what works best for you.

A good belt sized model is the 4 ounce. Plenty of hotness in one container even for multiple assailants. For home or RV, you can choose from a 9 ounce or the 1lb version.

Wildfire is also made as a gel-type formulation that comes out as a sticky mess but won’t be dispersed throughout the air. It is a smart choice for protecting yourself inside an enclosed space such as your home.

Comment
Figures only New York liberal state can’t even protect yourself I’ll be so glad when I leave New York State.

Comment
This is the Magnum Force of nastiness! I sprayed a vicious dog with this stuff, along with it's owner. It took the fight right out of them in less than 2 seconds. It lasted long enough for the police to arrive, which took a good 15 minutes.