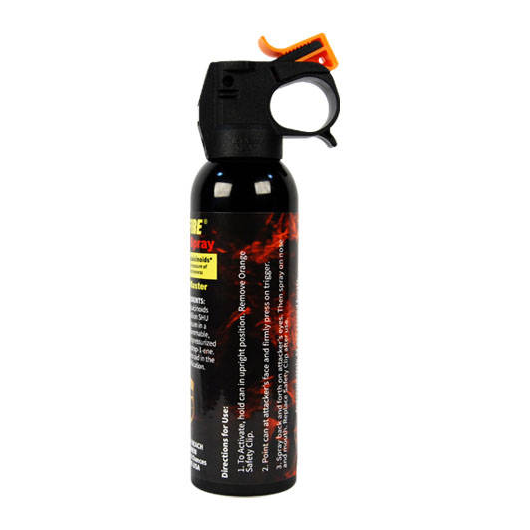 This Wildfire Defensive Spray is large enough to handle multiple assailants, animal attacks, and even crowd control. Keep this in your home or RV or use a nylon holster to keep it on your side when taking a walk. A blast of this pepper spray is inescapable. If you have the need to use this, the person you're aiming at will definitely get sprayed and will cease whatever they were going to do.

Being manufactured in the same lab as the "police" sprays right here in the United States, the Wildfire brand has become synonymous with police grade pepper sprays. We're so confident about Wildfire that we had it tested.

Major Capsaicinoids are the true heat measure and WildFire has the hottest on the market at 1.4% MC. In addition to causing an attacker pain, the 10% oleoresin capsicum formula swells the mucous membranes, which makes breathing difficult. It also swells the veins in the eyes, causing the eyes to close.

The 9oz model of defensive spray is great for crowd control, military, correction, security and law enforcement officers. Great for civilian use as well.

Firemaster grip has a finger loop.