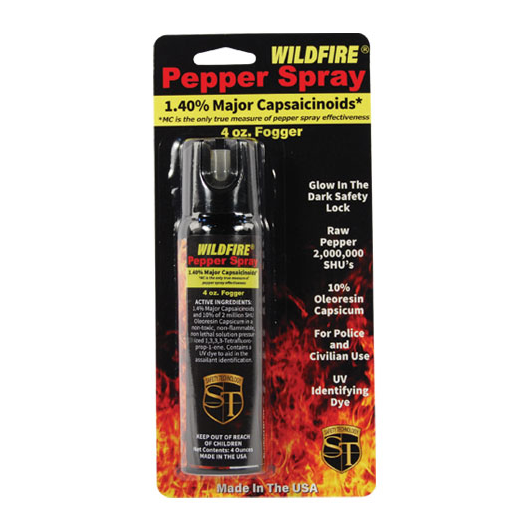 The 4-ounce Wildfire Pepper Spray comes in either a stream or fogger model. This size is great for an RV, camper, home, or as a utility belt everyday carry spray.

It's your choice of either a stream or fogger dispersal pattern. The stream allows you to better direct the spray onto your target while the fogger gives you a wider margin of error while spraying.

This fogger or stream pepper spray is an improved formula that reacts quickly and effectively to disable any assailant.

In addition to causing an attacker pain, the 10% oleoresin capsicum formula inflames the mucous membranes, which makes breathing difficult, and swells the veins in the eyes, causing the eyes to close.

It's made from 2,000,000 SHU's (Scoville Heat Units) of raw pepper and the debilitating effects can last up to 45 minutes, yet causes no permanent damage. Has a UV identifying dye to help aid in the identification of an attacker.

Add the leatherette holster with belt clip to carry on your belt.

The fogger model has a glow in the dark actuator to help you see it better at night.

Purchase one or more of the fogger or stream pepper spray models now. Click Add to Cart above.

WildFire 4 oz 1.4% MC pepper spray stream and fogger are a favorite with security guards and gives excellent protection at home.

Using A Fogger or Stream Pepper Spray For Self Defense

Self defense sprays have been on the market for several years and are mostly used as an alternative to using guns by law enforcement personnel. In the recent past, the use of pepper sprays as a method of self defense has increased tremendously.

The truth is that pepper sprays are one of the best devices for personal protection. A few reasons supporting this is that they are small, light, and no specialized training is required to use these devices.

In addition, the fogger and the stream spraying range is far enough to keep away any attacker.

OC (Oleoresin Capsicum) is a kind of formula extracted from hot peppers. It is not an irritant but an inflammatory agent. When you spray an attacker with an OC spray, two things will happen instantly.

First of all, the individual’s eyes clamp shut and even when they try to get their eyes open, the Oleoresin Capsicum dilates the capillaries and hurts so bad, they will be unable to keep their eyes open.

What happens next is uncontrollable coughing since the Oleoresin Capsicum causes inflammation of the breathing tissues. It takes up to 45 minutes for the effects of this natural chemical to wear off.