A Complete Guide to Buying a Stun Gun 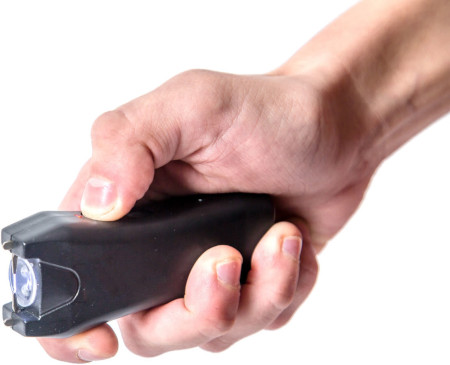 The world around us is ever-changing and in order to stay safe, you need to change with it. It is important to feel confident in your surroundings knowing you can protect yourself.

These days, there are many reasons to consider buying a self-defense weapon.

Your safety is paramount, and sadly, the world seems to be descending deeper into violence.

But you don't have to venture out into the world defenseless. Even if you're small in stature and don't possess other self-defense skills, devices such as stun guns are proven to be effective at stopping attackers in their tracks.

Some people choose firearms, but others are not quite as comfortable with that option. A stun gun purchase is often the next choice. As the name suggests, this device delivers a quick jolt to someone with the intent to stop them in their tracks.

There are a few things you need to know in order to make the best decision.

In this blog post, we'll discuss the basics of these guns and how they work, how they can stop an attacker, and what to consider when buying your own.

What Is a Stun Gun?

A stun gun is a type of electroshock weapon that works by delivering an electric shock to a threat.

The purpose of the electrical shock is to temporarily (and non-fatally) disrupt muscle and motor functions while inflicting a substantial amount of pain, without delivering injury.

How Do They Work?

A stun gun sends a high voltage, but low amperage charge. This charge interferes with the body's muscles and the nervous system. Muscle control is compromised and there is often confusion and even sometimes a temporary state of paralysis.

These devices utilize short bursts of high-voltage shocks (but at a low current level) to disturb muscle functioning.

There is intense pressure and even discomfort, but it is normally not too intense, and very rarely life-threatening.

Typically, the device will have two exposed electrodes (metal conductors of electricity) that are pressed against an attacker.

Depressing the trigger button sends a high-voltage electrical current to the electrodes which then travels through clothing and into the body of the attacker.

How Do They Stop an Attacker?

The person on the receiving end of the shock likely won't know what hit them.

To see it on TV, it looks simple, but it’s not as easy as just touching someone and they immediately go down. To disable someone, the stun gun needs to be held against a muscle group for up to five seconds if possible.

The best target areas are the shoulder, neck, under the arm, belly, or groin.

If you are being attacked, this list may not jump to mind, so just try to keep the gun against their body for as long as you can. Exposed skin is also the best place to try and stun. If you must do it through clothing, try to pick something other than a jacket or jeans, which will insulate them somewhat from the shock.

A powerful, non-lethal electric stun gun, disrupts the normal functioning of muscle movements, effectively disabling the attacker for a short period of time (depending on the device and the duration of the shock). 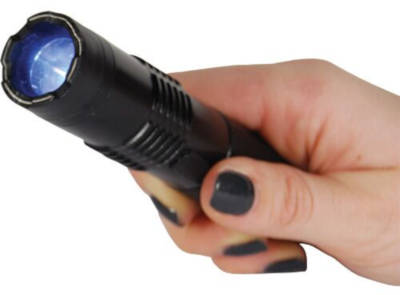 Often times, the shock (even if only a few seconds in duration) will result in the attacker losing all control of their movements. The attacker will likely drop to the ground in a disabled, disoriented, and bewildered state.

Interestingly, the electric shock actually interrupts how the brain functions. The circuits which would normally control movements are interfered with by the electric shock. The effects of receiving an electric shock from the device will generally persist for anywhere from a couple of minutes to over half an hour.

The degree of the response to the stun depends on a few factors. The type of gun is important, obviously. Also, the size of the individual being stunned and the length of time the gun is held against the body play a role in the effectiveness.

Incapacitating an attacker with a device of this type gives the defender adequate time to escape the attacker and call for help.

How Quickly Does It Work?

A stun gun works immediately upon contact with the attacker.

The electric shock is powerful enough to immediately subdue a would-be attacker, giving the victim ample time to escape the situation.

Additionally, these weapons only deliver a shock to the assailant, even if they have a hold of you. The electric shock travels through their clothes and is completely absorbed by the body of the attacker.

A common misconception is that these weapons cause the person on the receiving end of the shock to have a heart attack. This is not true. The device is non-lethal and does not cause significant or permanent injury (though, the attacker will wonder if they sustained a massive injury due to the pain inflicted).

The disorienting and debilitating effects of these devices are proven to be an effective means of self-defense.

What to Consider When Buying Your Own

Now that we’ve covered the basics of what a stun gun is and how it works to disable an attacker, let's dive into what to look for when buying your own.

Listed below are various considerations that need to be made before purchasing the device that is best suited for your wants and potential needs.

Learn How It Works

As with any piece of equipment, you should read the manual and all the instructions that come with your stun gun. Learn where the switches are. It should be in safety mode when out, but not being used. If it becomes necessary to use, be familiar with how to immediately turn it on. 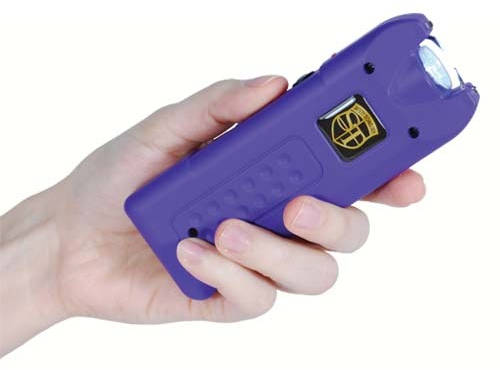 Get used to the way it feels in your hand and how it handles. If you are keeping it in a purse or satchel, you may even want to practice getting it out. In the middle of a stressful situation, you will want to know exactly where it is.

Another important piece of advice is to keep your stun gun fully charged.

Drawbacks of a Stun Gun Purchase

The effectiveness of a stun gun is through debilitating pain. Using it on someone who is under the influence of certain drugs may not have the same effect. The drugs may create an increased tolerance for pain that could actually backfire. In some cases, it can even make them more aggressive.

As with other types of self-defense items, a stun gun can be taken away and used by the attacker against the owner of the gun. To help with that, there are some models with a detachable wrist strap that when separated, will incapacitate the device rendering it unusable against you.

There may come a time when your stun gun is unavailable. Here are some great tips for the best self-defense moves.

Owning a stun gun is much easier than trying to get a handgun. Most states don’t require permits for them and they are usually legal to carry. It is always a good idea to check the laws where you live, and also if you intend to travel with one, be sure to research the local laws.

Stun guns are cheaper in price than a firearm. They are more accessible and easier to find. There is also no training involved or ammunition to buy. 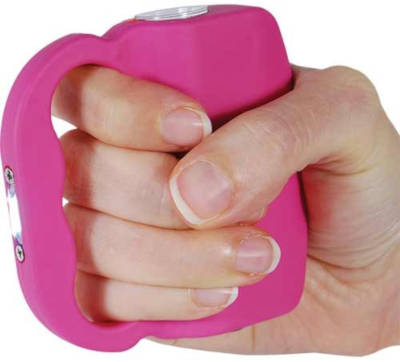 Obviously, they are non-lethal and that eases the minds of most people who just want to use them only to escape harm and not permanently damage someone.

Many people might hesitate to shoot a gun because of the emotional ramifications after the fact. The use of a stun gun usually does not produce those feelings.

Technology and innovation have come a long way. You can now purchase stun guns in a variety of sizes and shapes.

This brings an element of surprise and in some cases, is easier to carry. You can find stun guns that look like flashlights, pens, or even cell phones.

If you are curious about the current models, here is our category page of the best stun guns on the market.

You will not always know when danger is present, but there are times when you will feel unsafe. It is a good idea to be prepared and have the stun gun already in your hand so you are ready if provoked.

Be familiar with how your stun gun works. The probes must be touching the attacker and then press the trigger. Hold it against them for as long as you can to make sure they are completely temporarily disabled.

An important aspect of these devices to take into consideration is what the voltage output is.

There is a common, but false, belief that the higher the voltage, the stronger the stun. The volts determine the speed of the charge into the body, but not the size of the charge. It is the amperage that determines that.

The voltage of a device is in direct proportion to its stopping power. The market is filled with a wide variety of voltage ranges, so care should be taken when selecting yours. 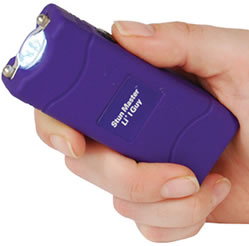 Just one amp can kill someone. Amps are measured by milliamps; or thousandths of an amp. An effective stun gun should deliver at or above 4 milliamps.

Even devices with a lower voltage rating will have sufficient power output to stop an attacker. However, the higher the voltage output does also translate into greater stopping power.

Once again, the market has a wide variety of products available, with devices ranging from small, medium, to large.

It’s important to consider the ease of use and ease of transport when selecting your own device. Mini stun guns, for example, are small and lightweight which makes them easy to carry and conceal. Many devices of this size are also more affordable than other, larger models.

Medium size weapons are also easy to transport and conceal. The large sizes sometimes referred to as batons, are typically used most often by law enforcement and bodyguards. Though, they are also well-suited for home defense.

Before purchasing your personal defense device, it’s important to research and be aware of any laws pertaining to its use.

Not every state makes its use legal, while others allow their use but with legal restrictions.

Check with your local law enforcement agency to verify that carrying such a device is legal in your area.

Before purchasing a stun gun, be sure to compare the different features of your potential choices.

Some key features to look for include a disable pin, personal alarms, and rechargeable batteries.

A disable pin is a practical feature that prevents the attacker from using your device against you. The device is attached to you via a wrist strap. If the pin is pulled out, it won’t work.

Other handy features to consider and watch for are ones that include a personal alarm or a flashlight. The loud alarm will startle an attacker as the sound draws attention to the scene. Flashlights, alternatively, are ideal for anyone needing extra protection at night.

Everyone deserves to feel safe when they are out and about. The world is a scary place and it is up to each of us to be prepared. There are many options available for protection. A stun gun purchase may just be the choice you need.

Devices such as stun guns can literally be a lifesaver in the event of a personal attack.

They are safe to use and carry little risk of causing serious injury. To browse through our selection of stun guns and other personal defense devices, visit our self-defense store!