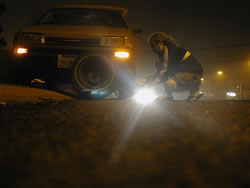 That’s the time to either run away or initiate a defensive attack with the stun device. By pressing and holding the device against the attacker, you inflict pain and the involuntary contracting of the muscle group where you are holding it. The longer the contact, the more debilitating effect it will have.