How Do Stun Guns Work?

A stun gun is an electrical self-defense device that uses high voltage to stop an attacker. Touching a person with the prongs of the device quickly immobilizes the attacker. However, because the amperage is very low, no serious or permanent injury is inflicted. 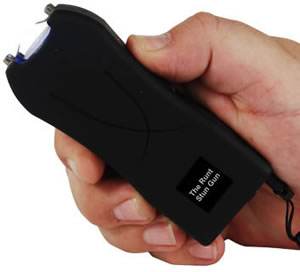 The stun gun is designed to key into the nervous system. It dumps its energy into the muscles at a high pulse frequency that makes the muscles work very rapidly, but not efficiently.

This rapid work cycle depletes blood sugar by converting it to lactic acid all in just seconds.

The resulting energy loss makes it difficult to move and function. At the same time, the tiny neurological impulses that travel throughout the body to direct muscle movement are interrupted.

This causes disorientation and loss of balance and leaves the attacker in a passive and confused condition for several minutes.

Although there is no significant effect on the perpetrator's heart and other organs, you have the time you need to get away and get help.

They are a direct contact weapon - not to be confused with a TASER™ Device.

What is the difference between a stun gun and a TASER device?

As a general rule, a one-half second contact will repel and startle the attacker, giving some pain and muscle contraction. If he lets go, take off and get out of there.

One to two seconds can cause muscle spasms and a dazed mental state. Over three seconds can cause loss of balance and muscle control, mental confusion, and disorientation. Realize that 3 seconds is quite a long time when in a physical struggle.

You will not be affected even if you are holding your attacker with another hand or he is holding you! The extreme shock does not pass between people.

What is a Stun Gun?

A stun gun is a self-defense item that can be used to stop another person who is attacking you. It uses high voltage energy to quickly immobilize the attacking person. It is designed to transfer the energy into the muscles of the person at a high pulse rate which causes the muscles to work at a very rapid pace, but on a very inefficient basis. This process makes it extremely difficult for the attacker to function at all in regard to moving or attacking. The attacker will be disoriented and confused for a time, but will not have any harm come to him in regard to his vital organs. 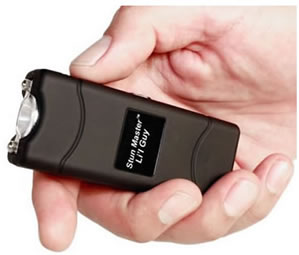 In general, a contact of one half of a second will repel and startle the intruder. One to two seconds results in a dazed mental situation. Three seconds can cause loss of muscle control and loss of balance and disorientation. The energy passing to the attacker will not affect the person who is holding the stun gun. Even if the attacker were to touch the person giving the stun, there will be no effect on the person holding the unit.

The stun gun usually has a very high voltage, but the amperage is very low so as not to cause permanent injury, although the process can be very painful for the attacker. The person receiving the voltage can be disabled for up to 30 minutes.

Most models are small enough to be carried in a purse or fit in the pocket of a jacket or pants. Many models will include a belt with a clip or holster so the stun gun can be worn at the waist.

Most of the states allow these devices to be used in their jurisdiction, but some states restrict their use. The states of RI, NY, MA, MI, IL, CT, and HI are states where these items are restricted. Before purchasing it would be a good idea to investigate whether or not there are any restrictions in the area in which you live. Your local police department would be a good place to receive information like this.

If traveling, be sure to pack your device in your checked luggage, not in your carry-on bag. There is a good chance that it would be confiscated if it were to be found in the carry-on bag. These devices are not allowed in the terminal areas of airports either. Also, you should never have these items with you in any government building as they will more than likely be confiscated.

A stun gun is an excellent, safe device that can be used in situations where an immediate safety situation requires quick action in order to neutralize an attacker. This device is perfect for such a situation.

Surprisingly, stun guns, or at least a primitive type thereof, have been around since the 1700s. A Leyden jar was used to store electrical charge from static buildup.

The cattle prod was the first useful product that followed this line of thought, and it also helped develop the more efficient methods of delivering an electric shock that was non-fatal. Cattle prods are still being used by ranchers to this day.

The first stun gun was actually a stun glove and used an electric current that ran up a tube into a glove. This device was originally invented in the 1930s but never really caught on. It wasn’t until the 1960’s that the stun gun really got rolling when the TASER device was invented.

This device was actually intended for an air safety device that Marshals could use to subdue a criminal while in mid-flight. Since then, the TASER device has become one of the most popular self defense items in the world, simply because it is non-lethal, effective, affordable and easy to use.

Get Over Your Fear of Stun Guns

Many people feel a specific emotion when they see a stun gun and that emotion is usually fear. It's mainly from the electricity. People have this innate fear of electricity even if they've never had any experience with it.

And that is completely understood because electricity can kill you. So, first things first...the electricity from one of these cannot kill you. It will hurt real bad, but it is not lethal. Even the ones that claim to be millions of volts won't kill you. It's the amperage, not the voltage that can kill you and stun guns use less than 5 milliamps.

If you had a fear of these devices before reading this then you shouldn't any longer. Also, if you're looking to purchase one for defensive purposes, I would keep that little tip to myself. You can let others fear your personal protector.

Your next decision in owning one is which model to purchase. There are many different sizes, styles, colors, and voltages available. The answer is: whichever one fits you the best. You may want a smaller one because you have small hands. You may want a larger one such as a stun baton because you work security at a nightclub. A cell phone or lipstick is perfect if you want to conceal the device. Any voltage is enough to bring someone down when used in the right areas.

Ok, your fear of stun guns is gone and you've chosen the perfect model for you or your loved one. How are you going to defend yourself if you are attacked?

Three-Step Lesson on How to Use a Stun Gun

Lesson One: To use a stun gun, have the weapon out and in your hand in any situation where you could be an easy target. I'm not saying to walk around Wal-Mart with a stun gun in your hand while you shop, but criminals look for easy targets or opportunities. If you're walking through the mall parking lot, a parking garage or alone, in general, you're a pretty easy target. If you're walking in these same areas with a weapon in your hand, the criminal is going to find someone else. Nobody wants a huge scene when they're trying to rob, attack or rape you.

Lesson Two: if you are attacked, pick a large muscle group to stun. The chest, the stomach, obviously the groin, the thighs, and the back are ideal places to stun an attacker. These large muscle groups will bring down an attacker very quickly. Now, you don't have all day to make a decision, so if the face or neck is the closest body part you can reach, well, then it's just not his lucky day. Also, the longer you hold it on someone, the longer and more effective the stunning will be. One to two seconds will get their attention. Three to five seconds will get their attention, most likely drop them to the ground and leave them confused.

Lesson Three: take quick but detailed mental notes of the attacker and then RUN! Go get help immediately. If you've stunned the guy long enough to drop him to the ground, chances are it'll take some time for him to run off. And even if he does, you should have some details to give to the police. Oh and be sure to even call the police. Some people figure that if the guy runs off, it's too late. It's not. The guy with a few screws loose that just attacked you will do it again. And if you don't report it, then we can't warn others. And the next person may not be as prepared as you.

I hope this article was helpful to you and be sure to pass it on to others. The more people we can empower, then maybe the safer our world will become.

STUNGUN EFFECT & USE: A stungun is a legal (check state & local laws) EID, Electronic Immobilization Device that emits high voltage shock. By merely applying the unit to an attacker they are immobilized for up to several minutes with no permanent damage.

Stun guns do not rely on high amperage for results. They are designed to key into the nervous system, interrupting tiny neurological impulses that travel through the whole body as well as instantly burning blood sugar by converting it to lactic acid similar to that of extremely vigorous exercise.

Attacker's neuromuscular system is overwhelmed and controlled by the EID, disorientation, and loss of balance occur and direct voluntary muscle movement is lost. Should you make contact with the body of the attacker, no current will pass through your system.

When an EID is combined with the use of Pepper Spray, it is recommended that a non-flammable EID compatible spray is used such as Pepper Shot or Wildfire Brands.