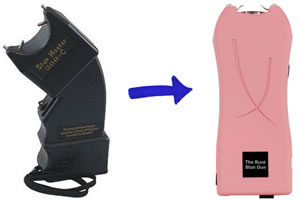 Many self-defense weapons are on the market today including many you can hold in your hand. Different handheld models include the extendable baton, the kubotan, pepper spray, TASER devices, and the hand held stun device, more commonly known as the stun gun.

A typical stunner delivers high voltage electricity yet with low amperage so as to do no damage or cause any injury to the person.

Stun guns work mainly by inflicting pain but also cause the muscle group where it is applied to work very rapidly. This rapid work cycle depletes the tissues of blood sugar and converts it into lactic acid rendering the muscles too fatigued to be able to do anything else for a short period of time.

Used correctly, an electric shock security device will allow you to retreat from an attack and get away to safety. By applying the weapon to the body of the attacker and pressing the trigger mechanism, you are injecting a large electrical load of energy into their body. This overwhelms the person's nerves and causes severe pain and discomfort.

There are other shapes and disguised models that do not give the appearance of being any type of self defense product. When choosing one to buy, you can decide which one best fits your lifestyle.

How to use Handheld Weapons

There are a couple of schools of thought on how to properly use a stun gun.

This will display a show of force by the sight and sound of the electrical discharge. The thought process of doing this is that it will scare off the attacker because they won’t want to be stunned by it.

They won't know it’s coming and the shock value will add to the pain they experience when getting stunned.

Plus, since you took them by surprise, you may be able to get some extra time to hold the stun gun against their body, thereby increasing the effect of the device tremendously.

The longer you hold it on them, the more overwhelming the effect.

As in most things, it would be situationally dependent. It may work in one case but not in another. You’d have to use your instinct and gut feeling to determine which would be the best course of action for your circumstances.

Either way, your handheld shock device gives you options for protecting yourself. From the extended reach of a baton to a covert and innocuous-looking cell, you can choose which version works best for you. Always keep your personal protector with you at all times. Call the police once you get away.

Start your selection process by clicking the images above or by going to the stun gun category page. There, you will find a wide variety of products to choose from, including those items normally used by the military, police, and law enforcement.