What is a Blowgun?

Over 40,000 years ago, the first tube shooters began to appear in many different parts of the world.
Although crude, these primitive weapons were extremely accurate.

They are still used today for hunting by Amazonian Indians in South America and by Pygmies in Africa. They were also used by the Ninja prior to 1500 in Japan for silent assassination with poison darts.

It is not known exactly where blow guns originated; however, it is generally believed that they appeared simultaneously in many parts of the world. Back then, they were made from bamboo or other hollowed-out woods.

The blowgun is a simple but effective weapon for firing a light projectile through a narrow tube using the force exerted by one's breath. The power is only limited by the lung capacity of the user. 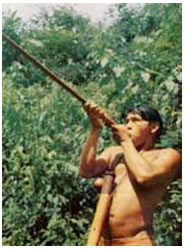 Many cultures throughout history have made use of this weapon, most notably the indigenous peoples of South and Central America, as well as the peoples of South East Asia and Africa. The Cherokee and other Indians of America also made use of the blowgun at an early period. Various projectiles, such as seeds, pellets, and darts, were fired at short range to bring down small game such as birds, lizards, monkeys, and squirrels or rabbits. 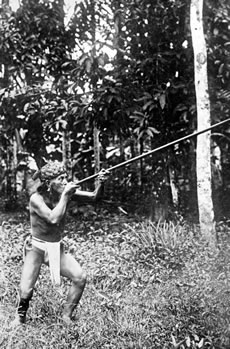 Blowguns are traditionally made of any hard, hollow growth, such as river cane in the Americas and bamboo in Asia. Darts might be made of hardwoods or animal bone, with tufts of down, feathers, or fur serving as the fletching. In other areas, the tubes were often made of curved, polished hardwoods glued and bound together to provide a durable tube. Modern versions are made from various materials, such as plastics, fiberglass, and aluminum.

The ultimate hunter's weapon, blowguns are potentially deadly, silent weapons. But with limited range compared to a gun, they require great stealth to use in the wild. Yet they are a simple weapon that anyone can use without special training. Mastering this weapon to fire the projectile with real force and accuracy only takes a little practice.

Though they can still be used for hunting where legal, today, they are more of a recreational weapon. Often they will be used to fire small paint pellets marking the target, as well as traditional darts. Competitions involving the blowgun are held around the world as this simple but affordable hunting tool maintains high popularity.

Sports competition is managed by the International Fukiyado Association out of Japan, where blowguns were once a favored weapon of the legendary ninjas. It has affiliate organizations in many countries, including the U.S., Germany, France, and the Philippines. Standards of competition require both tubes and darts to be of a fixed length and caliber, shooting from various ranges but usually a 10-meter distance. It is hoped that this type of shooting will one day become an Olympic event.

In Japanese competitions, the darts are made of cellophane plastic rolled into a cone shape to propel a brass dart. But in Japan, the Fukiyado Association has privatized the sport so that all products and materials are controlled by them. Tournament blowguns must be 120 cm long with a diameter of 13 mm, and the dart 20 cm long and weighing .8 grams, with no mouthpiece allowed.

Another influential organization is the Cherokee Annual Gathering Blowgun Competition. It sponsors and hosts a more rigorous competition that is more like a biathlon. Participants move on foot through a course of set targets, firing and retrieving darts until reaching a final target which must be struck from a 20-meter distance and the target 24 centimeters in diameter. Scoring is based on speed and accuracy, but shooters advancing to the next round must move back an additional two yards. In Cherokee competition, depending on the event held, the gun is usually hardwood such as oak or ash and 6 to 9 feet long, with a dart 6 to 22 inches, fletched with bull-thistle or rabbit fur.

In other U.S. and European competitions, blowguns are usually .40 caliber in diameter and limited to 4 feet in length. Mouthpieces are allowed, with varying restrictions as to dart weight and length. The jakaltec style of Central America calls for a wooden blowgun about 1.3 meters long with a sight placed 30cm from the end.

Elsewhere, stainless steel or aluminum darts are common, while simple piano wire is often used. Various manufacturers provide darts of anywhere between .35 and .75 caliber. The use of even larger models is often sold or hand-made, where hunting is still legal. Darts can be made from hardwood or bamboo skewers, nails, or pieces of a wire coat hanger and affixed with knots of thread or fishing line to serve as the dart fletching.

Given the silent, deadly nature of blowguns when combined with modern chemicals, they are now restricted in many areas, such as California and Massachusetts in the U.S., and are now illegal in countries like Guatemala, where they traditionally originated. They are also illegal for use in Canada and some European nations.