For hunting or backyard shenanigans, you can't go wrong with one of these. Blowguns are for sale at ridiculously low prices.

Grab your gear! Your air blow gun needs some darts to shoot. Or maybe just some paintballs to splat. Either way, you'll find it here.

No blow tube is complete without adding some accessories. These accessories enhance your weapon and double the fun. The added benefits allow you to reload and engage your target quicker without ever losing your sight picture. Being able to maintain your target and engage multiple times is just one added bonus of our PAINTBALL QUIVERS and our SPLATMATIC reloader.

Be sure to pick up extra paintballs, so you're not in need of them when it counts. For your convenience, we offer several quantities to choose from: the 100 pack, 250 pack, and the ever so large 1000 pack.

We also offer Target Darts. These lightweight, extremely accurate darts are the real thing. They can penetrate up to 1/4" of plywood. Remember, safety should always be kept in mind when using blow guns. These darts should only be used by responsible adults or under close adult supervision.

Blowguns provide an extremely fun and exciting activity for young and old alike. In no time at all, you'll be able to hit exactly where you want. Great game or contest.

Modern day blowguns are still very similar to those that have been used by primitive peoples for centuries. The blow gun utilizes a hollow tube, which holds a single dart tipped with a sharp end. The user places the dart in the blow gun, and expels forcefully in the mouthpiece, to send the dart right to its target. 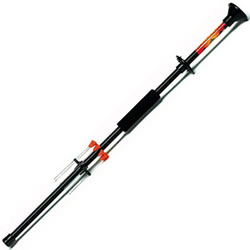 Many people have painted certain types of poisons or substances on the tips of the darts to allow maximum fatality capabilities in their hunting. Greek, Chinese, Roman and South Pacific tales have discussed these hunting tubes, and this may be one of man's earliest weapons on record.

Those who are unfamiliar with the blowgun may think it is too small to be effective, but in fact, it can provide an uncanny speed to the dart.

Properly used, darts can travel up to speeds of 400 feet per second, which is estimated to be double that of a traditional bow and arrow. This is perhaps why some Amazon Indian tribes in Brazil still use them to this day. While most modern weapons enthusiasts may not be interested in using one for hunting, it cannot be denied that this is a unique and effective weapon.

People who are fascinated with Native American culture will be interested to know that the Cherokee tribes commonly used blowguns and still practice this method of hunting to this day.

The Amazons also use them today and usually coat the darts with curare, a deadly neurotoxin poison. Besides darts, some of the projectiles that have been used with these include clay or lead pellets and even certain types of seeds. Whether you are interested in learning a new skill, wish to learn about the historical aspect of primitive weapons, or just enjoy darts, you can get what you need with us.

Our stun darts are excellent to remove your property of pests or varmints, as they are nonlethal but really get the message across with their sting. Our target darts are perfect for someone who is working on their expertise and hand-eye coordination, and our darts are perfectly weighted to bring about maximum accuracy. Our sharpened wire darts are tipped with .40 cal end caps, so you must use caution. You can even find paintballs.

An Overview Of A Blow Gun

If you have ever watched an old movie, one that took people into the Amazon rainforest, you have likely seen a scene or two where blow guns were used. These look like large pipes, roughly an inch in diameter or smaller, where an individual will aim it at a target and blow into the tube. This will cause the projectile to be sent at high speeds, either wounding or simply striking the target. They are referred to as blow tubes and were initially used for centuries as a simple weapon where darts and other projectiles could be utilized for offensive or defense of purposes, yet today they are primarily used for sport. Here is an overview of what a blow gun is, how it is used, and the many different reasons that people use them today.

The History Of The Blow Gun

From a cultural perspective, you can actually see drawings and paintings of individuals that have been using these for centuries, if not millennia. In most primitive cultures, they were used as a weapon that could be used in self-defense, attacking other tribes, or they could be used for hunting. The people that typically are seen using them are those from the Amazon Rain Forest, Southeast Asia, and even Guatemala. The projectiles that are used will include clay pellets, darts, and even seeds. Sometimes poison or some type of paralytic is actually applied to the projectiles. In regard to hunting, in Northern America, they were used to hunt game on a regular basis. Pre-Columbian pottery has actually depicted the use of these blow gun, which is used not only for practical reasons but also for sport.

Aside from using a blow gun for reasons of attack, defense or for hunting, they are actually utilized for many different types of competitions. It was once thought that it would become an Olympic event, where a very specific standardized barrel caliber would be used, as well as a particular size and length of darts that could be used for the competition. Part of the reason for this shift in the use of the blowgun is that more modern weapons have been created since the advent of this device. Guns and rifles are simply much more lethal, making the blow gun more of a novelty item. Many people are interested in not only using them, but collecting, and there are many types that have been made. Let's now discuss some of the materials that are actually used for blow guns that are used all over the world.

There are very specific materials that have been used over the centuries for creating both the blow gun and darts. The darts, in particular, are made of a type of hardwood that can actually prevent them from cracking, whereas in countries such as Asia, bamboo skewers are used because they simply grow in that manner. On the dart's fletch, materials can be added such as animal fur, and even feather tips for show. It also makes it very easy to recover the dart if it is blown into a wooded area, something that was very common with indigenous tribes that used these for hunting on a regular basis. Today, the materials may include carbon reinforced plastic, and it is also made of aluminum. In Japan, a cellophane plastic is used, as well as a non-pointed brass brad, specifically in areas where this has become a privatized sport.

In the same way that a rifle is manufactured with a different sized barrel in order to achieve a certain purpose, the same is true in regard to the diameter of the blowgun, not only outside, but inside the barrel, which can allow it to project the darts much further. For example in Japan, they use what is called a Fukidake, and in tournaments, they can only be 120 centimeters. There is actually no mouthpiece used, where the users simply wrap their lips on the tube, and with some international versions, the tube can actually be flexible. Other types include the Cherokee which is made from what is called river cane. These can be as long as nine feet in length. The darts that are used are also exceptionally long, reaching almost 2 feet in length, made of local hardwoods which may include maple, ash, and oak. The Jakaltek is made of wood, and the projectiles that it uses are actually clay pellets. These tend to be much more stable, only having a length of four feet, making them much more stable and allowing the user to have better and when used for either sport or hunting. Finally, there are the modern blow guns that are manufactured today in both the United States and Europe. They only have a diameter of 10 millimeters and are used for competitive shooting, with a varying degree of barrel length and different sizes of darts that are used.

In conclusion, blow guns offer a unique form of sport either for practice or for hunting purposes. There are countries such as Guatemala, Australia and certain states in the US which have categorized blow guns as a type of offensive weapon. However, just as a gun can be used for target practice, or used by someone to hurt another, these tube-like pipes can be both fun to use and also a way of defending yourself. As the years go by, there may be changes to the categorization of the blow gun and users may be limited by age. Currently, there is no age requirement for using a blowgun, which is fortunate, as it can be a very entertaining way to spend your time simply doing target practice, something that kids will do with BB guns every day. At the very least, it is one of the most unique devices that has ever been created, with a multitude of different purposes. Perhaps one day you might invest in one of the more modern versions of this ancient weapon of choice, or simply make one to use for your private enjoyment.