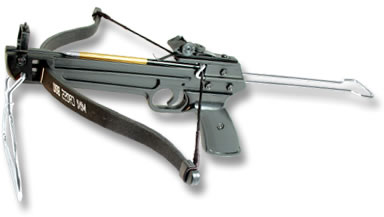 Crossbows are stock-mounted bows that shoot bolts and are primarily used for hunting and target shooting. If you are interested in either field, the first thing you should do is to determine the most suitable type of crossbow for your needs and abilities.

Recurve crossbows are often used by advanced archers, shooters, and hunters. They are also noisy to use and thus require the accompanying use of a bowstring silencer.

Compound Crossbow
There are several variants to a compound crossbow, but all of them basically work the same way. The string of a compound crossbow is attached to a number of pulleys, and one or several of them are connected by cables to the opposite limb. Upon preparing to take a shot, the string will naturally draw back, which makes the pulleys turn and the cables move accordingly. The limbs will then bend, thus storing energy for the shot.

These crossbows are characterized by limbs that are stiffer than usual and require greater pressure from the users because of the design. Their structure, however, allows compound crossbows to become more energy efficient than other types of crossbows.

Rifle Crossbows
These are crossbows primarily designed to provide better aim, just like how rifles perform compared to other guns. Rifle crossbows are one of the most advanced models you can use. A 150lb rifle crossbow, for instance, can come with adjustable sights, foot pull, and heavy-duty fiber construction. It can hit your target as far as 250 feet away. Of course, such power also requires you to possess equivalent strength to launch your shot and cock your bow effectively.

Bullet Crossbows
This type of crossbow is also aptly named because it shoots bullet-looking projectiles made of stone, lead, or clay. Some bullet crossbows come with a string slot and barrel while others have a double string design.

Repeating Crossbows
If you want a shortcut to the entire process of shooting then you should make use of a repeating crossbow. With this type, you only have to make a single movement and everything, from bow stringing, projectile launching, and shooting, will be completed. This way, you’ll be able to shoot at a faster rate than usual.

As crossbows vary according to the amount of energy required from the user, size, acceleration system, and degree of automation, make sure that your choice satisfies your needs in all aspects.

Ready to try one?