Weapons for Self Defense

We carry a variety of self defense weapons that you could use to protect and defend yourself against an attack. The more common ones we carry are stun guns, pepper spray, and telescopic steel batons. We also carry animal repellents that can help defend against attacking dogs or even bears.

Check our other categories for more self defense weapons, including stun guns and pepper spray. 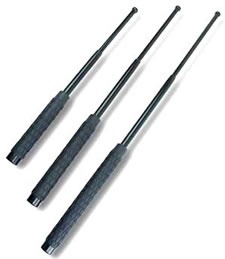 Stun Guns are direct-contact weapons that cause involuntary muscle contractions at the point of contact. This depletes blood sugar by converting it to lactic acid, all in just seconds. The resulting energy loss makes it difficult to move and function. Stunners have been shown to be effective when used correctly. The drawback of using a stun gun as opposed to distance weapons is that you have to touch the attacker with the stun gun physically.

Pepper spray is another option that is very common for personal defense. Police officers often use pepper spray to subdue a subject or to get them to comply with verbal commands. Pepper spray as a self defense weapon gives you, the user: distance. By having space between you and your attacker, you can avoid physical contact and an actual fight. Sprays have proven themselves a very capable defensive tool.

Telescopic steel batons are effective in both offensive and defensive modes. They can be used by people of any size and can inflict great harm upon a person out to get you. A telescopic steel baton is a formidable weapon in the hands of some who know how to use it.

Self Defense Weapons have been around forever. They may have changed with the times, but there has always been a need for effective self defense against attackers. By always carrying something on your person, you will greatly increase your chances of surviving an attack and coming out on top.