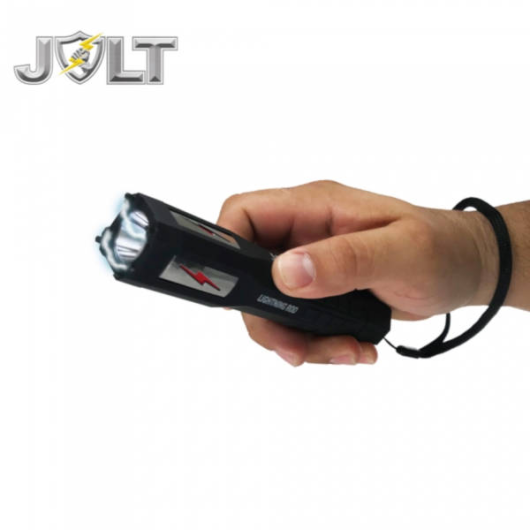 A Stun Pen has always been a favorite for the clandestine type. Having an effective means of self-defense while not showing off or giving away your defensive secrets is a major plus!

Strongest Stun Pen: At 90,000,000 theoretical volts, this is the highest voltage pen-type stun gun available. Just test firing this unit into the air is often enough to scare an attacker. As the bright electric current pulsates across the top of the unit, it creates a frightening electrical sound. An attacker with any sense at all will certainly pause to reassess himself. If the sight and sound don't stop him, a powerful jolt of electricity from this stun pen certainly will.

The power of this stun gun is 80% stronger than most models. The 180-lumen XPE LED light is almost three times brighter than the light currently used in most stun guns. The Lightning Rod has three dynamic light modes: high, low, and strobe.

Powerful XPE LED Flashlight: The built-in flashlight provides a convenient source of illumination whenever you need it and eliminates the need to carry a heavy, bulky flashlight. If you're asked what that is you have, you simply tell them it's a flashlight. No one needs to know that it's really a stunning device.

The rubberized handle with “Grenade Grip” texture ensures a firm grip, while the square head prevents rolling. To make this unit even safer to carry, Grab Guard Stun Strips extended down all four sides of the unit in order to shock anyone who would attempt to take it from you. The recharging cord (included) plugs into a standard wall outlet to save you money on batteries and protect the environment. Includes a wrist strap and nylon holster with belt loop.

The Lightning Rod is made of the highest quality components and comes with a lifetime warranty. See the enclosed instruction sheet for complete details.