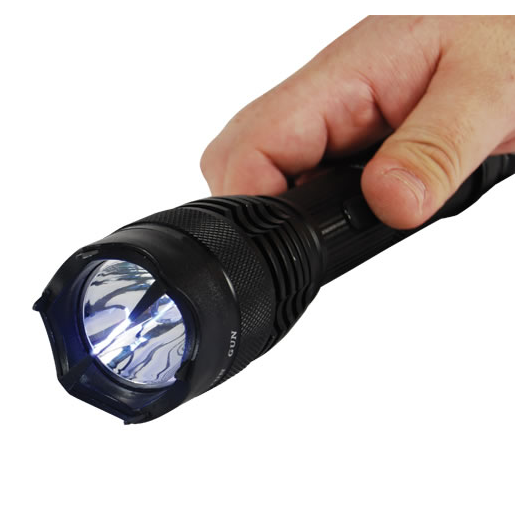 What is a stun gun flashlight?

The Stun Master Mini Badass flashlight stun gun is made of high-quality aircraft aluminum and delivers a shocking blow when used as a stun gun, flashlight, or baton. Built to last and to deliver extreme doses of overwhelming electricity.

The very bright light can be used as a distraction to temporarily blind your attacker by shining it on his face. While he's disoriented, you can apply the extremely powerful voltage to their body. While he attempts to recover from the overload of electricity, you can make your escape.

Now, you can carry 85,000,000 volts of heavy duty stopping power almost anywhere with no one even aware of it because the stun gun is concealed in the flashlight. Light up any attacker and leave them wishing they had never approached you with 4.7 milliamps of power. It measures 9 3/8” x 1 7/8” and has a lifetime warranty.

Don't be afraid any longer. Carry this innocuous-looking flashlight with you on your daily rounds and be prepared to defend yourself. It's rechargeable and comes with a recharging cord and a convenient holster you can attach to your belt.

Very easy to use and you will not get a shock back even if your attacker is touching or grabbing on to you. The electricity does not travel throughout the body and is only localized where you make contact with the front of the stun gun and the person's body.

Self defense products are becoming more and more of a need for people around the globe. As crime rates continue to rise in urban areas, people are finding themselves more vulnerable to attack. Even if the crime rates are low in your area, or you live in a suburban environment, you still can never know when someone might try to harm you.

This is why you need to have something like a stun gun flashlight at your disposal. These self-defense devices are safe, reliable, and when used provide enough of a shock, and bright enough light, to throw your attacker off guard, giving you ample time to escape.

The flashlight also ensures that you have adequate light in a threatening situation, or can even be used to flag down passers-by if you require assistance.

Stun guns come in many convenient shapes and sizes for both men and women. If you want something smaller and easier to carry, we provide a compact keychain-sized stunner with flashlight, which is also fully rechargeable, containing a slide-out plug that will fit into any standard outlet. They are also available in two colors, black and pink.

For those of you who want a larger version, we provide a tactical stun gun. The tactical model is specially designed for those who work in a security-related jobs. Because no prongs are visible, it looks just like any typical light. It also has an especially bright light adequate enough to temporarily blind a potential assailant. It comes with a standard wrist strap, and is fully rechargeable, either through a wall outlet, or your car's cigarette lighter.

A stun alarm flashlight is one of the best devices available on our website. It contains three tools in one: a bright and powerful flashlight, a stungun, and a loud alarm with a red flashing light. It comes with a shoulder strap so that you can carry it anywhere. It is one of the best compact tools you could ever have in an emergency situation. It is almost guaranteed to keep you protected.

We have a large variety of self-defense products for you to choose from, not just stun devices or stun flashlights, but also pepper sprays and even home alarms.

Comment
It’s is exactly what I was looking for. Works great