Get social
Join us!
Account
Sign inRegister
0Cart
Cart is empty
View cart
Home/Self Defense and Security Blog/Where and When Do Most Muggings Happen?

Where and When Do Most Muggings Happen? 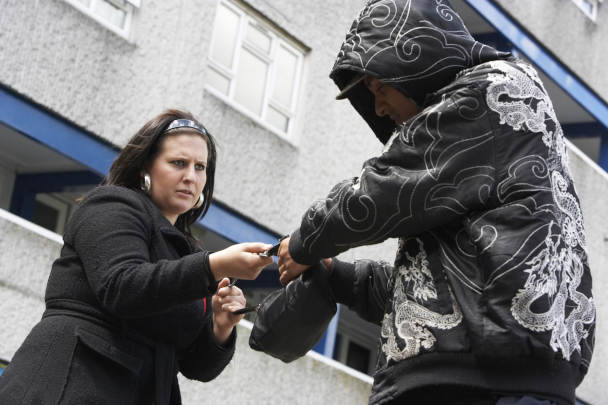 According to the FBI, property crime has been down but violent crimes have been up.

Mugging--it's something everyone wants to avoid and some people don't even think it will ever happen to them.

The reality is that, regardless of falling crime rates in the last two decades, getting mugged is still a very real threat.

A big part of defending yourself and your loved ones is being aware of the reality of muggings, as well as knowing the high probability of when and where they might happen.

Today, we'll take a look at just that so you can be better prepared.

What Exactly Are Muggings?

To start, let's define muggings: the act of attacking or robbing an individual in a public place.

This is different than something like burglary, which is committing a crime by illegally entering a private building or home.

Muggings are sometimes committed in broad daylight or in the middle of a crowd. It's chilling to think that someone might try to assault you in such a public way, but this is what you should try to prepare for.

An Expert Word of Advice

He talked to TODAY about ways to avoid getting mugged, such as by having personal defense weapons on the ready. But he also mentioned that Friday is a particular day to watch out for.

Solano explained that most criminals will assume that people get paid on Friday, so they'll think you have more money on you than normal.

The weekends, while a time for fun and catharsis, should also keep you on your guard.

Be particularly ready for self-defense, even when you're out celebrating the end of the workweek.

A Look at Times of Muggings

At one point, they released an infographic detailing when crimes most likely happen based on some major cities.

While clearly major cities will account for a higher source of criminal activity, the times are an interesting point to look at.

The infographic shows that assaults are likely to happen at almost any time of day, other than perhaps between 3 a.m. and 5 a.m.

Burglaries, on the other hand, tend to happen during more pre-planned hours. It's common for burglaries to occur during typical weekday hours, or 9 a.m. to 5 p.m.

This makes sense as a burglar is avoiding getting caught and therefore assuming that a victim is out at work during the day.

Assaults are different, though, and can include the off-chance, heated fistfight. There's no real "time of day" when a fight is more likely to occur, but does that mean you are always at risk of mugging?

A Street robbery, for example, is more likely to occur on weekends rather than on weekdays. Children under 18 are likely to be robbed between 3 p.m. and 6 p.m., which corresponds to the time they would most likely be coming home from school.

If you're worried about being held up by a gun or even shot, those crimes tend to occur in the night hours. Think early morning or late at night.

Using a gun on a person is a serious crime, so it makes sense that even a criminal would be a little more cautious about when they would pull a gun on someone.

It may seem like an obvious word of advice, but be extra cautious and on your guard during the nighttime.

Crimes, such as muggings with or without a gun, might be more likely to happen when it's darker out. There's less light for witnesses to see what is going on or to identify people, so criminals might feel more empowered.

A Look at Where Crimes Occur

Other than the time of day, you may be wondering where muggings occur.

The FBI has also released some current data about the cities with the most violent crimes in the United States.

Criminal activity may not force you to move away from a city that is already your home, but it's certainly a factor to consider. Some people need to check the concentration of criminal activity in a city before they make a major move, too.

Major cities usually have a higher concentration of crimes compared to rural areas. The bigger the city, the larger the population, and the more likely you are to get mugged.

This isn't entirely true, though. There are a lot of other factors contributing to the rate of crime in a city other than purely population.

For example, New York City, New York, isn't on the FBI's most violent cities list whatsoever. Buffalo, New York, on the other hand, is, and Buffalo is over 90 percent less populated than New York City!

Regardless, it's important for you to monitor statistics like these released by organizations such as the FBI.

While they may or may not compel you to move anywhere, it's crucial to be in the know about where in the United States crimes are more likely to occur.

It may save you from a dangerous move.

Protecting Yourself From Muggings

You can arm yourself with all of the best self-defense weapons and classes in the world, but one important part of the equation is being aware.

Knowing when and where muggings are more likely to happen is important for your self-defense.

Muggings can potentially happen at any time of day, although Fridays and weekends, in general, are usually a higher risk. Crimes involving a gun usually occur at night times, so it is important to be especially careful in the dark.

Major cities can easily be a source of higher crime rates, but that isn't always necessarily true. Monitor studies that determine where violent crimes most likely occur in the United States.

With all of this helpful information, you'll be more aware of your surroundings and able to defend yourself and your loved ones.

If you'd like to see some more of the self-defense tools and advice we have at TBOTECH, feel free to contact us right away!