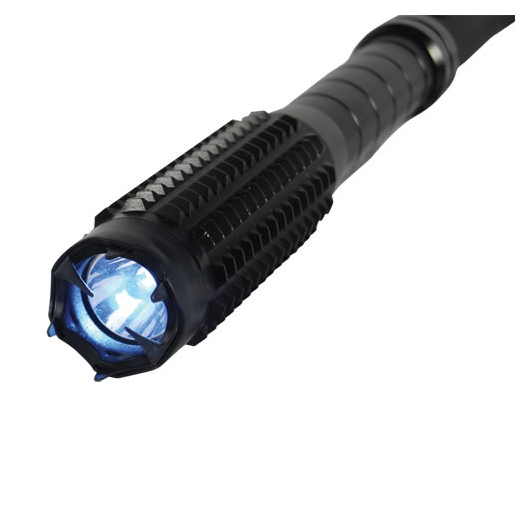 And for Good Reason...

Blind, Buzz and Bash! Introducing the all-new Stun Master Bad Ass! This 3-in-1 baton is the first combination of its kind made out of aircraft-quality aluminum. Strong enough to be carried as a nightstick. It features a high-end tactical flashlight and a powerful 110,000,000 volt blast of electricity that will put the biggest, baddest attacker on, well…. his ass.

Often imitated but never quite duplicated, the Bad Ass Baton is made of some of the strongest material known to man. The 120 Lumen super bright LED flashlight will provide that beacon of light in a dark and scary world. Disorient your opponent by flashing this beam into their eyes, and they'll be temporarily blinded by the intensity of it.

And with its firm rubberized grip and wrist strap, the Bad Ass Baton can easily be used as a heavy-duty clubber. While they are struggling to get their night vision back, you can take appropriate action and defend yourself. Don't give them the chance to get you first.

Strong Enough to be Used as a Heavy Duty Clubber!

At the front end of the baton is a jaw-dropping 110,000,000 volt stun gun. The baton emits an electrifying shock with the simple ease of pushing a button. Powerful is an understatement when it comes to the juice this stun baton emits. When you get this in your hands and test fire it, you'll know for sure you don't want to be on the other side of it.

You can even use it as your flashlight when you go walking at night. Lights up your way in dark places and is ready to use for self-defense in an instant. It packs a whopping 110,000,000 volts and will have an assailant squirming with pain in seconds. This electrifying shock stick is great for police, security guards, even military personnel.

The baton includes charger cord. Measures 14 ¾” x 1 ½” and has a lifetime warranty.

What is a nightstick?

A nightstick is a long, usually wooden, club that is carried by police officers and other law enforcement personnel. It is also known as a police baton, billy club, or truncheon. Nightsticks are typically used to strike an offender on the body in order to inflict pain or to subdue the person. In general, night sticks are used as a less-than-lethal option for law enforcement officers and security guards when they need to subdue or control a suspect or individual. They can also be used for self-defense.

For civilians, night sticks are also used as weapons to defend themselves or others from physical attack.

The Nightstick Flashlight with a Twist

The Bad Ass Night Stick Flashlight and Baton has a twist on the traditional version of old. It's made of metal instead of wood and has the debilitating surprise of massive amounts of electricity stored up, ready to be pumped into your attacker. You can also blind your attacker temporarily by shining the light into their eyes.  While they are disoriented and trying to get their night vision back, you can counter attack and disable them completely.

Comment
I purchased this bad ass stick for my wife and it's bad ass my wife feels safe with it the light is bright and the stopping power sounds incredible .. thanks