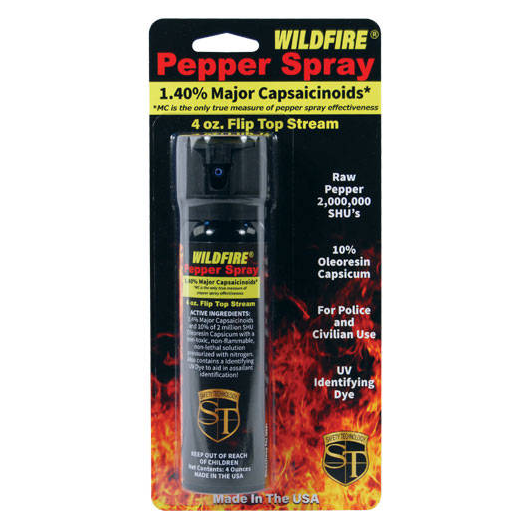 This improved upon formula is the best pepper spray available.

OC (Oleoresin Capsicum) in a large pepper spray is the most effective ingredient in self defense sprays. You can feel confident when purchasing that you will be armed with one of the best sources available for protecting yourself.

These are a little bigger canisters that holds more than your typical keychain model. It ensures you will have more than enough to handle multiple attackers. One spray to the face is all that's needed to stop anyone. Easy to hold on to, with this model you have ample grip to aid in orienting toward the bad guy.

This is a great size to carry on the hip or in a purse.

Pepper spray swells the mucous membranes, which makes breathing difficult, and swells the veins in the eyes, causing the eyes to close. These effects last up to 45 minutes and cause no permanent damage.

WildFire pepper spray is an inflammatory agent. It will induce coughing, choking and nausea, as well as dilating the eye capillaries resulting in temporary blindness. The mucous membranes will swell to prevent all but life support breathing causing the assailant to be temporarily incapacitated. A one second burst of WildFire pepper spray will stop an attacker for up to 45 minutes without causing permanent damage.

This gives you valuable time to get away!

Wildfire is an improved formula that reacts quickly and effectively to disable any assailant. The WILDFIRE® PEPPER SPRAY is hot, hot, hot.

In addition to causing an attacker pain, The WildFire 10% oleoresin capsicum formula swells the mucous membranes, which makes breathing difficult; and swells the veins in the eyes, causing the eyes to close.

When pepper spray is used as directed, it can be a safe and useful tool for self-defense. Legal to have in all 50 states, it's protection that's easy for any adult to carry. Inexpensive to purchase and simple to use, pepper spray is the most commonly carried weapon of choice for protection. Although it will do a job warding off a criminal, it's recommended to add self-defense or martial arts classes as part of an arsenal of options to thwart an attacker. If in doubt on how and when to use pepper spray, it's always a good idea to take a class.

Even though pepper spray is legal to carry without a license, make no mistake it IS a weapon. Recognizing unsafe situations and how to defuse them is half the battle. Purchasing pepper spray without a working knowledge of this weapon is a recipe for disaster. There are many stories where people have sprayed themselves on accident. Even though it is not deadly, it will hinder sight for anywhere between 15 to 30 minutes. The burning sensation on the skin is known to last approximately 45 to 60 minutes.

What is Wildfire made of?

Also known as capsicum spray, it's considered a lachrymatory agent. Meaning this agent is a chemical that irritates the eyes and surrounding skin, inducing pain, inflammation, and tears to the affected area. In using pepper spray, the short-term blindness will afford the person in danger time to escape. As you guessed, the active ingredient in pepper spray is capsaicin which is extracted from plants in the Capsicum genus. Combined with propylene glycol as an emulsifier.

One of the better pepper sprays is this Wildfire Large Pepper Spray in the 2-ounce size, which is just the right size to carry in a purse, pocket, or glove compartment. This particular spray measures 2,000,000 Scoville Heat Units. The range of effectiveness is approximately 8-10 feet. This is the measurement from the canister of pepper spray to the target that you want to hit. This large pepper spray canister will give you 6-10 one-second bursts.

It's best to keep in mind where you store or carry your pepper spray. Ensure it is out of the reach of any child or pet. It's also recommended that you purchase two pepper sprays. One spray should be kept aside for use in an emergency, and the other can be used in a practice session. Practice sessions should be executed in a safe area away from people and pets on a fake target that represents a predator. Setting aside some time to work with your pepper spray will ensure it will be used appropriately in an emergency situation.

Comment
my wife likes running with this for protection against attackers and, mainly, dogs. Easy to carry.