Individual throwing weapons in a variety of points, shapes, and sizes to practice Shurikenjutsu (the art of throwing a shuriken).

Ninja stars are an ancient weapon of choice used to inflict damage and injury from a distance. Accurately throwing these shurikens was a hallmark of the Japanese Ninja. 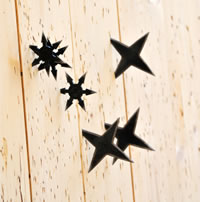 Some martial artists still train with these. And for many, it is a sport similar to knife throwing.

Being able to hit your target consistently takes practice. But once you get the hang of it, you'll be hitting your target every time. Star throwing can be made into a fun backyard competition. All it takes is your stars and something to throw them at, such as the target board.

A small file may be used to sharpen or resharpen your stars.

These ninja stars are heavy duty professional shurikens. Most of these come with their own carrying case that has a belt loop for easier carrying. Read our guide on ninja weapons.

Throwing stars have multiple points with sharpened tips to allow them to stick into a target regardless of how it hits. Usually having between 4 and 6 points, there is always a blade that is facing forward when it impacts. There is even an eight-point star that increases your chances of a "stick". 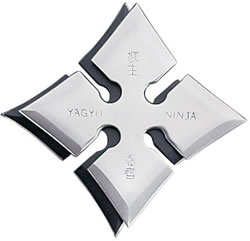