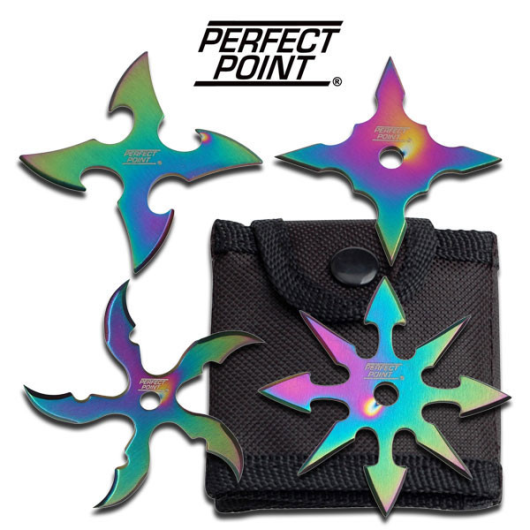 Comes as a set of three and includes a carrying case. Nice set of professional 2.5-inch throwing stars.

These are some smaller throwing stars, but sturdy, and give you a different size of rainbow shuriken.

A Brief History of Throwing Stars

Everyone knows what a throwing star is. They're featured prominently in movies, TV shows, and anime that feature ninjas. They even come in metal cards. But most people don't know anything about the history of these little tools. So that's where we come in. We'll give you a brief history on the throwing stars so that the next time you see a ninja throw one at his enemy, you'll know if it's accurate or not.

What are Ninja Stars called?

The Japanese word for throwing star is "Shuriken." These small, star-shaped devices are concealed weapons that were primarily used for thrown attacks. However, they were also used for slashing or stabbing when needed. The name shuriken is used to describe any type of small, bladed object. The throwing stars most people are familiar with were called "shaken."

Most people didn't rely on the shuriken as their primary weapon. They were used to supplement a warrior's sword or other weapons. They were also wielded by samurai, not just the cloak and shadow ninjas that most people would think of.

A shuriken shouldn't be confused with a kunai. Kunai were knives that were primarily used for thrusting or stabbing. They were also thrown in battle and can be seen as primary weapons in animes like Naruto. However, these are very different weapons than the shuriken.

Shurikenjutsu was the term used to describe the art of wielding a shuriken. It was taught as a small part in many of the more famous Japanese schools of martial arts. Shinto-ryu, Shinkage-ryu, and Togakure-ryu all taught shurikenjutsu as part of their curriculum.

Shuriken can be thrown in many different ways. You can throw them underarm, overhead, or even sideways. However, the throw will always involve the blade sliding smoothly between the wielder's fingers. It was always a controlled throw and was never just thrown out randomly.

Despite a lot of research into the subject, there is very little to determine the origin of shurikenjutsu. Part of this comes from how secretive the Japanese were during the time about their martial arts practices, especially regarding concealed weapons. However, there were also numerous people who came up with the art of throwing a thin, sharpened object at the enemy. So finding a definitive origin is incredibly difficult.

The first record of a school teaching shurikenjutsu is the Ganritsu-ryu school in the 17th century. They used an object that was long and thin with a bulbous head. It is thought that this weapon was derived from the arrow. This school taught numerous weapons that resembled arrows and needles.

Shuriken often have holes in the center. Their blades are thin and usually only sharped at the tip. This made it easy for a person to carry them since they could be worn on a string or belt. The hole in the center also made it more aerodynamic and aided in the flight for when it was thrown.

The Japanese throwing star, also called a ninja star or a shuriken, is a centuries old weapon. It is a complex weapon that was used by more than just the traditional ninja. While a lot of the history is still shrouded in secrecy, there is a ton of information out there about them.