These elegant personal protection products are not only fashionable but very effective at stopping a full-on attack by any bad guy that accosts you. Containing 6-10 one-second bursts and shooting out up to 8 feet, this 1/2 ounce keychain pepper spray will be with you always when you connect it to your keys.

A rhinestone, paste, or diamante is a diamond simulant made from rock crystal, glass, or acrylic. Originally, rhinestones were rock crystals gathered from the river Rhine, hence the name, although some were also found in areas like the Alps. Source: Wikipedia

We've added this decorative accouterment to the cases of our very popular OC self defense spray making them even more fashionable to carry with you. 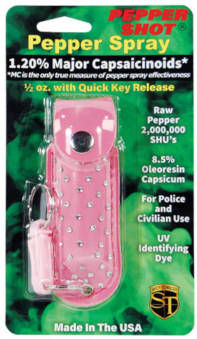