Get social
Join us!
Account
Sign inRegister
0Cart
Cart is empty
View cart
Home/Self Defense and Security Blog/Pepper Spray vs Mace: What's the Difference and Which Is Better?

Pepper Spray vs Mace: What's the Difference and Which Is Better? 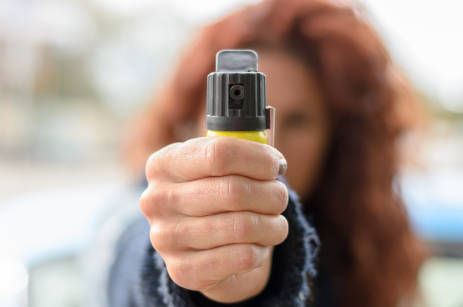 Using pepper spray or mace on someone sucks.

But sometimes it's necessary—which is probably why you're reading this article. If you're in a dangerous situation, make sure you take necessary actions before having to use pepper spray or mace.

If you're looking for extra protection to carry around with you, you've come to the right place.

Understanding the difference between pepper spray vs mace is important when considering buying one of these products. Both can be dangerous and knowing how to handle pepper spray or mace in self-defense will help you stay safe.

Continue reading to find out the difference between pepper spray and mace and which one might be right for you.

What Is Pepper Spray?

Pepper spray is mainly made of what its name suggests: pepper. Among several components, pepper spray's main ingredient is oleoresin capsicum. This is an oil derived from a plant in the family of Capsicum, which is the source of chili peppers.

However, because pepper spray is made of a chemical made of capsicum and other active irritants, it contains a much higher volume of capsicum than chili peppers do.

Because of the components similar to chili peppers, pepper spray hurts to deal with. Typically made in a spray form, pepper spray aims to target the eyes, nose, and mouth.

When hit with pepper spray, you'll typically have immediate burning sensations and even a bubbling feeling in your face. It can also induce nausea, coughing, dizziness, throat burning, rashes, and blisters.

The effects of pepper spray last about 30 minutes and don't normally require medical treatment. Pepper spray can be treated with flushing of the eyes with water or saline, washing of the body and clothing, and lots of blinking.

Pros and Cons of Pepper Spray

Understanding the pros and cons of pepper spray is vital when considering buying it. Some pros are that you'll feel safer, that it's made for self-defense, and that it's legal in all states.

Some cons are that it hurts to be sprayed with, it's dangerous in extreme cases, and that if you don't use pepper spray in self-defense, victims might try to sue you.

Death from pepper spray is extremely rare but possible. In several cases, prolonged exposure to pepper spray has caused enough damage to result in death.

Pepper spray is an effective self-defense tool that's legal in all 50 states. There are some restrictions in some states, but pepper spray is widely available to those who want to carry it.

First things first: mace is a brand name. Just like we call all adhesive bandages "Band-Aids," mace is widely referred to when just talking about pepper spray or tear gas.

Mace was created in the 1960s using phenacyl chloride (also known as CN, used in tear gas) to aid the police in captures. Unfortunately, the original mace caused thousands of injuries to the cops using it and it also proved relatively ineffective in incapacitating perpetrators.

Since most perpetrators were under the influence of alcohol and/or drugs, using mace on them was practically useless.

Pros and Cons of Mace

The pros and cons of mace are important to understand. There are not many pros of mace, but some cons include that it's ineffective for attacks, it's illegal in some states, and that it contains dangerous chemicals.

Today, Mace® Brand produces a line of self-defense products. Among these is a trademarked pepper spray under the name of Mace. Simply, mace is a kind of tear gas, known as an irritant.

With some confusion aside, mace is a trusted brand name today.

The Difference Between the Two

The biggest difference between pepper spray and mace is that they don't offer the same effects to those sprayed.

When spraying mace at someone who is under the influence of drugs, alcohol, or psychotics, chances are that nothing substantial will happen. This is inconvenient and dangerous for the user of mace and merely a distraction for the perpetrator.

However, spraying pepper spray is guaranteed to give a reaction big enough to temporarily blind and gag your assailant, allowing you time to get away. Pepper spray harbors harsh chemicals that cause reactions like nausea, burning, rashes, and tears.

Another difference is legality: while mace is still available in most states, it's illegal in Washington, Wisconsin, and Hawaii. This is due to CN, which, while improved since the 1960s, is still a dangerous chemical to use.

On the other hand, pepper spray is available and legal in all 50 states, allowing you to have access to a tool used mainly in self-defense.

Ultimately, due to the chemical CN in mace, it's classified as a type of tear gas. Due to some restrictions, mace is harder to have and use in the U.S.

Pepper spray is an inflammatory agent, making it harmful and toxic to those sprayed with it, distracting them, and allowing you to run away fast.

How to Use Mace or Pepper Spray

Mace and pepper spray typically both come in small aerosol canisters that spray a concentrated stream of chemicals.

Since these are small canisters that take the form of spray cans or guns, they're meant to be on belts, in purses, or held in your hand.

Designed for a quick response to an attack, the canisters that pepper spray comes in are easy to handle. Typically with a quick-unlock feature, these cans can be used within a distance of 4 to 12 feet from your attacker.

The best way to ensure total distraction of your attacker is to aim your pepper spray or mace directly at their face or chest. Getting hit by mace or pepper spray in the chest can be just as painful since the vapors will still travel up to the eyes.

Obviously, using pepper spray or mace on someone is meant for dire circumstances and not for frequent use. Take caution when checking your surroundings and fighting off potential attackers.

Pepper Spray vs Mace: Which One Is for Me?

If you're considering purchasing pepper spray or mace, you'll need to keep in mind the pepper spray laws in your state.

Buying pepper spray for self-defense while running or traveling is smart. Some people prefer to carry it in-hand or have it in their purses in case of emergencies.

Depending on where you live, you should still be able to purchase pepper spray in all 50 states relatively easily. On the other hand, mace is harder to obtain because of restrictions that prohibit owning it in the states of Washington, Wisconsin, and Hawaii.

If you're worried about legal issues like potentially being sued by someone you pepper-sprayed, don't worry. Pepper spray is legal and meant to be used only in self-defense, and if your case is clear-cut, you should be fine.

Which One Works Best?

Due to the improved version of mace pepper spray with CN, its properties do not affect attackers the way pepper spray does. Pepper spray will harm and distract your attacker well enough to allow you to move quickly.

Since pepper spray is an inflammatory agent, it targets the perpetrator's eyes, mouth, and nose. It should temporarily blind, gag, scare and stop your attacker from advancing more.

Law enforcement officials have access to high-volume pepper spray for assistance with capturing perpetrators. Because the original mace was created for police and failed, law officials now use concentrated pepper spray.

If dogs or other animals take a hit from pepper spray, they should have the same recovery time as humans: about 15-30 minutes. There should be no long-lasting effects and using it will allow you to get away from an aggressive animal.

Practicing Self Defense With Pepper Spray or Mace

When it comes down to pepper spray vs mace, you should look to buy pepper spray. It's legal and available in stores and online.

Practicing self-defense with pepper spray means that you should become familiar with your device and that you should find a place to keep it safe. Using it for emergencies will help you stay safe and aware of your surroundings.

If you're in a dangerous situation right now, be sure to take all necessary legal precautions before stocking up on pepper spray or other self-defense materials.

Thank you. Great information. Pepper spray was purchased. Now I know the difference.