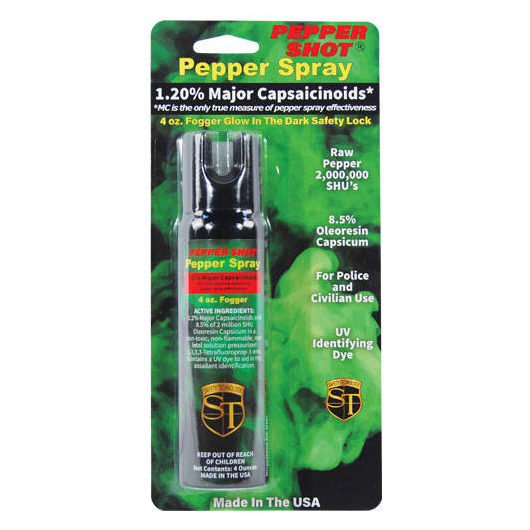 Our 4 ounce Pepper Shot™ is a favorite with security guards and gives great protection at home. Get the leatherette holster with belt clip to carry on your belt. It is available in a stream or fogger.

Pepper Shot is made with 1.2% Major Capsaicinoids

The Major Capsaicinoids are the true heat measure and Pepper Shot 1.2% MC is more effective than most other sprays.

It's made from 2,000,000 SHU's of raw pepper, and these effects can last up to 45 minutes and cause no permanent damage. Has a UV identifying dye to help aid in the identification of an attacker.

Large size cans ensure you have enough to get the job done. A blast of this stuff in their face will have them screaming in pain and all they want to do is find some water.

Both have locking actuators for extra safety. These security guard size pepper sprays are great for in your home, RV, or when you need to carry just a bit more protection.

When you are considering adding pepper spray to your self-defense capabilities, there are a number of factors that come into play. One of the first and most important is which chemical compound a specific product uses.

These work in different ways. The first two, CS and CN, are irritants. They cause stinging pain and watering eyes. They work ok, provided you bear in mind their limitations. First, the effects are not immediate and can take up to 30 seconds to be felt by the assailant. Second, they often don't work as well on people who are drunk or under the influence of drugs. The reason for that is alcohol and other drugs can inhibit the pain receptors.

OC, on the other hand, is not an irritant but an inflammatory agent. When sprayed, the assailant's eyes will slam shut, no matter what chemicals may be in their system. OC will also dilate the capillaries in the eyes, causing temporary blindness. Further, it will swell tissues used during breathing, making it very difficult to get air.

The idea behind defensive sprays is to incapacitate your assailant so you can escape. The 4-ounce model sold at the top of this page is made with OC.

Previously, we talked about the different chemical compounds commonly used. Here, we'll talk about other considerations to keep in mind when comparing products, namely pattern and capacity.

Spray pattern refers to the way the chemical is delivered to the assailant.

As for capacity, most products note the capacity in terms of the number of bursts. A burst usually lasts 1-2 seconds and one is hopefully going to do the trick. But, it is always better to have more than you think you'd need. And don't be afraid to use too much when it counts!

Finally, three factors come into play when it comes to being successful when using pepper spray.

First, it is vitally important that the chemical hits the assailant in the face. If it doesn’t, then no matter what chemical it is, it won’t work.

Second, it isn’t going to work if you leave it at home. You need to have it with you.

Third, you need to practice to be effective. You need to be able to pull the canister from your purse or belt and spray an assailant without having to first look down to make sure your fingers are in the right place. Go through the motions several times to make sure you got the hang of it. This muscle memory will be crucial if you need to use it.

Consider getting one to practice with so you can see the stream or fog come out. You can practice with an inert canister, so you won't accidentally get yourself sprayed.