Here you will find the how to for opening and closing your steel baton in video format.

The way these expandable or telescopic steel batons work is by using friction to hold open the individual tubes. As you force the weapon to the open position, you must use sufficient force for friction to take effect.  If you just flip it upside down and allow it to extend that way, there is not enough friction for the baton to stay in the open position.

Now, once the baton has been properly opened, it doesn't want to close back into itself very easily. This is on purpose! You don't want your baton to loosen itself up and collapse on you when you are using for an offensive or defensive maneuver. However, if it did do that because it was not extended properly, you can simply flick it right back out in a forceful manner that locks it into place.

Here's the quick down and dirty of how to employ and redeploy this steel baton self-defense weapon.

When closing the baton, you do not want to tap it very hard.  If you do, it is possible to bend the cylindrical shafts. If that happens, your telescopic steel baton will not collapse into itself. Tap it gently! You are only trying to loosen it up some. Some say you don't need or even shouldn't do this and only need to slam it straight down on a hard surface. Straight down will avoid you bending your baton.

Here's another video from a guy reviewing the expandable baton and giving another technique for closing it up. 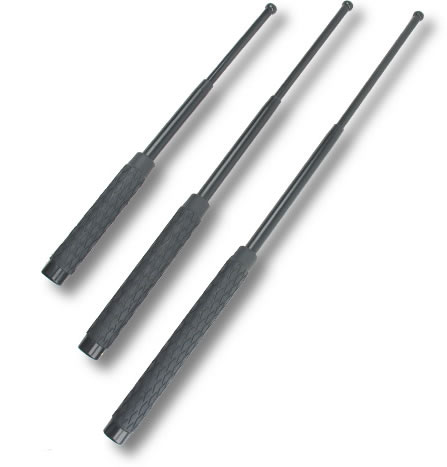 You can also find an automatic steel baton that slams open with the push of a button. And easily closes.