Avoid a Dog Attack with a Stun Baton

This is a story about how to avoid a dog attack from a person who purchased a Stun Baton.

There are many reasons to walk. My reason to walk is that I had a heart attack and was told by my doctor that I better get some exercise or it could happen again. He suggested that I walk to build up my cardio and strengthen my heart. So, I abided by the doctor's orders. I took the high road with a positive attitude, was thankful I was alive and listened to what the doctor recommended so I could prolong my life.

Avoid a Dog Attack with a Stun Baton 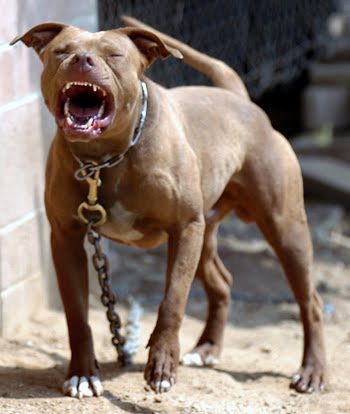 I was getting up every morning and walking, increasing the distance a little bit each day. This included venturing into parts of the neighborhood I had not previously walked through. Stray dogs were not usually a problem in my neighborhood. I felt safe walking down my street. BIG MISTAKE!

On one particularly beautiful morning, I was out on my stroll enjoying the normal hustle and bustle of life; people coming out of their houses, getting in their cars, and going to work. Some people just coming out to grab the paper while still in robes and coffee in their hands. It was just an all-around normal neighborhood scene.  Until I ran into a not-so-friendly dog.

All of a sudden a white van pulled into a driveway two houses in front of me. Nothing seemed out of the ordinary until the guy walked around to the back of the van and opened the doors. Out of the back of this van darts a pit bull, and it charged me. I froze, and my life flashed before my eyes. Before I knew it, I was a chew toy.

The attack was only a few seconds long but felt like an eternity. I wound up with 86 stitches in my hand and arm. After what happened I developed a fear of that particular breed of dog and I am even a bit skittish around other dogs.

Per my doctor's orders, and for my health, I still needed to take my walks. I felt my heart race every time I walked out the door. Here I am trying to REDUCE the chance of a heart attack, and my fear of another dog attack was about to give me one!

I decided that I would get some stick weapon protection so that I could continue my daily walks. I searched around on the internet and found a stun baton. This seemed like a perfect protection tool against a dog attack since I would have some distance between myself and a potentially aggressive dog.

I did a little more research and found that although a stun baton will cause discomfort to the animal, it would not leave any permanent damage nor would it kill it. But, it was enough to deter and protect ME from any harm.

Upon the arrival of my new dog stun baton, I was impressed with how lightweight it was and even better, the distance I wanted in case I was attacked again. Most importantly, I can walk regularly with no fear. If my heart is racing it is because I am just picking up the pace!