Get social
Join us!
Account
Sign inRegister
0Cart
Cart is empty
View cart
Home/Self Defense and Security Blog/What Is Pepper Spray Made Of?

What Is Pepper Spray Made Of? 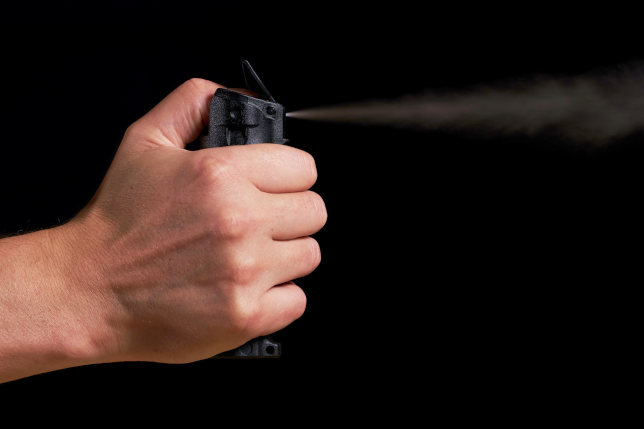 If you've ever taken a bite of a hot chili pepper, you might be familiar with the sharp, burning sensation that seems to stick around no matter how much water you drink.

Now, imagine that burning sensation all over your face--in your eyes, nose, and mouth. That's the idea behind pepper spray, a tool used for law enforcement purposes and self-defense since 1973.

Pepper spray is made of chili pepper extract, and it comes in an aerosol canister allowing you to spray at will. When sprayed into the face of an attacker, it causes pain and irritation to the skin, eyes, throat, and lungs. It has an immediate and powerful effect, which makes it the ideal self-defense weapon. But what is pepper spray made of? How does it work?

Let's explore what's really in pepper spray ingredients and how you can use it to protect yourself.

The very first use of pepper as a weapon was all the way back in ancient times. Chinese warriors used to wrap cayenne powder in rice paper and throw them in the faces of their enemies to disable them. Ground pepper was used as a weapon by warriors in Japan as well as law enforcement in Mexico, long before the development of new weaponry.

It wasn't until 1964 that a young couple--Alan and Doris Litman--started experimenting with an early design for a Mace canister. It took a long time to refine the first prototype and submit a patent, but by the late 60s into the 70s, Mace was widely used by law enforcement agencies across the country.

After years of development, pepper spray canisters are commonly used both as police weapons and as tools of self-defense for anyone who needs it.

What is Pepper Spray Made Of?

The main active ingredient in pepper spray is oleoresin capsicum (OC), which is an oil found in many types of hot chili pepper plants. It contains a compound called capsaicin, which provides the burning sensation.

It's odorless and colorless, but extremely powerful. Just one milligram of pure capsaicin is enough to cause blisters when it comes in contact with bare skin.

The OC is mixed with other inert ingredients to reduce some of the more harmful side effects and help it comply with local and state laws.

The spray itself is dispensed from an aerosol canister. It's mixed with a water or oil-based solution and a propellant. The whole solution is pressurized inside the canister, which allows you to spray the solution out to the person attacking you. There are a few different spray patterns you can buy:

Effects of the spray last between 20 and 90 minutes, blinding and incapacitating an attacker long enough for you to get away to safety. They can be fired multiple times in succession and have a range of 8 to 20 feet, depending on the type that you choose. 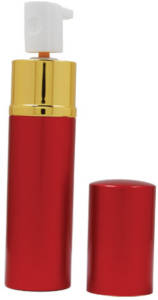 While canisters can be very small--sometimes even disguised as flashlights or lipstick tubes--the effects can be serious. Next, let's get into the specifics of how pepper spray works.

How Does It Work to Stop an Attacker?

If you hold a hot chili pepper in your hand, it probably doesn't burn at all. But if you're chopping the pepper and it comes into contact with your eyes or your tongue, you can definitely feel the heat.

The capsaicin in the pepper only reacts with the nerve endings in your mucous membranes like your eyes, mouth, throat, and lungs.

If you were sprayed in the face with pepper spray, you would immediately feel a stinging and burning sensation in your eyes, nose, mouth, throat, and possibly even on your skin. Left untreated, these symptoms can last from 40 to 60 minutes. If the spray were to come in direct contact with your eyes, they might become irritated and swell shut. This temporary blindness can last from 15 to 30 minutes. If you breathe in any of the chemicals, you might feel burning in your throat and lungs. This can cause severe coughing or difficulty breathing for up to 30 minutes. While the short-term side effects are intense and long-lasting, there aren't any long-term side effects once the attacker is deterred.

How Strong is Pepper Spray?

Pepper spray containing OC is effective against all attackers--even those who might not feel typical levels of pain, like those under the influence of alcohol or drugs. It's not only effective against humans, but also against wild animals. The severity of the spray depends on where it's sprayed, the amount that's used, and the strength of the spray. Spraying directly on the face is the most effective. However, spraying anywhere else on the body or in the vicinity of the attacker will still cause them to feel some of the effects. 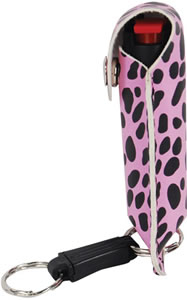 Just remember, the strength of the pepper spray ingredients isn't an indication of its effectiveness. The level of OC doesn't correlate to the spray's intensity. All you need is a spray that's effective enough to disable an attacker and allow you to escape or take control of the situation.

Pepper spray has been used as a law enforcement weapon and defense tool since it's official conception in the 60s and 70s. The product is also used as crowd control or riot control agents. Now you know what pepper spray is made with.

The capsaicin compounds that give pepper sprays their potency have been used as a military weapon since ancient times. While there are differences in tear gas formulas for a defense spray such as CS and CN, people and individuals have most relied on the irritant capabilities of OC spray.

Knowing what pepper spray is made of might give you some peace of mind and the confidence that you can fight off any attacker with this intense and effective self-defense weapon.

Looking for some civilian security of your own? Check out our list of bestselling items!