It seems like every day you see or read on the news about another use of a police stun gun. Although there is controversy about the overuse by police officers, the fact remains that there are a lot more people not dead or severely injured because cops had this tool available to them. 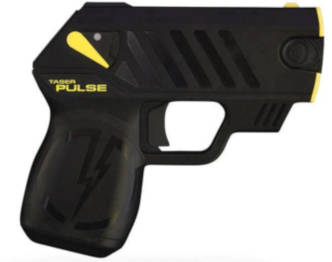 A police TASER device immediately incapacitates the person being tased and eliminates any threat they may have posed. This is good news for you! These same weapons are available to regular civilians in most states. While there are a few states that have restrictions, most Americans can use the same technology for personal protection that their local cops do.

There is one difference between the law enforcement model and the civilian version, and that is the distance where they are effective. The police model can stop someone in their tracks from 21 feet away while the civilian one is effective only up to 15 feet.

Fifteen feet is still quite a distance away. An attacker that far away has no chance of grabbing you or handling you in any way, so the tradeoff between the two seems minimal. You don't have to be up close and personal with the person in order to prevent the attack from happening.

Not a Typical Stun Gun

As a self-defense weapon, a TASER product is top-of-the-line and best of the best in nonlethal handheld devices. There are other electronic gadgets, namely a stun gun, but a regular stun gun has to make direct contact with the person in order for it to work. It has no distance capability, and for best results, the stun gun has to be held on the person for several seconds. In an attack, this can seem like an eternity, and it’s highly unlikely the person is not going to try and knock it away.

With a police stun gun or more properly, the TASER conducted energy weapon, you can immobilize the person from a safe distance, and the effects are quite immediate. They automatically lock up all their muscles and literally cannot move them. Every single muscle group in their body is affected, and they are unable to move or do anything else.

This is why the TASER device is the best police stun gun there is. Immediately effective and safe to use.

Law Enforcement weapons are those devices used by police officers in the line of duty that completely incapacitate their suspect. You've seen them on TV, and you've seen them on the news. A criminal that is non-compliant and resisting arrest will have the volts and amperage pumped into them by this device as soon as it is discharged. The arresting officer then has control over the suspect and can safely restrain them with their handcuffs. 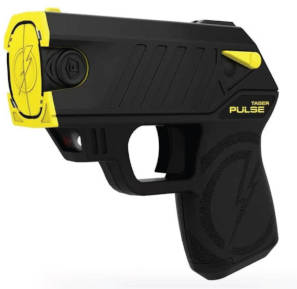 This picture above is similar to what the police carry with them on their duty belts. This self-defense device is actually called a TASER® device, not just a stun gun.

These highly effective police stun guns can stop a person in their tracks.

Although the model above is generally designed for our LE professionals, civilians can obtain a version that is just as effective and non-lethal as previous-generation models. The new model is called the TASER Pulse and is designed specifically for the civilian population.

The TASER Pulse fits perfectly in a purse or on a belt, so they're easy to carry. It is lightweight and you barely even know it's there...until you need it.

"Folks, this is the best self-defense piece of equipment available to you as a civilian. You can not get a better model. You can not get a more powerful model. There simply isn't anything out there that even remotely compares to this weapon."

This is not marketing hype. It's simply the truth.

In its strictest sense, police stun guns are specifically the model that our law enforcement people carry. However, direct contact weapons are often referred to as TASER devices also when they really are not. They work, but you have to force contact with the person in order for these to be effective.

These are also effective self-defense weapons in a direct contact form:

There are also stun flashlights and stun batons to choose from too. Click on any of the pictures to learn more about these "law enforcement stun guns."