How to Use the Stun Master Lil Guy Stun Gun

Warnings: Do not discharge the stun gun into the air for more than 1 (ONE) second. Repeat firing of the unit into the air for longer than one second can damage the device and will void the warranty.

While the safety switch is in the top position, press the shock button located just above the safety switch and you will see discharge at the end of the probes. Discharging the Lil Guy for more than 1 second at a time may damage the stun gun and will void the warranty. You will see and hear an electrical discharge between the electrodes. There is no need to charge the battery after each test.

TO USE: Touch an attacker with the outside metal contact probes while pressing the activation button. You can touch any part of an assailant's body but the large muscle areas and the upper torso is your primary target.

A 1/2 second touch will startle and repel assailants, giving them some pain and muscle contractions.

A moderate length touch of 2 to 4 seconds can cause an attacker to fall to the ground and result in mental confusion.

Contact of 5 seconds or more can cause loss of balance and muscle control, mental confusion, and disorientation.

NO SOUND WILL BE HEARD WHEN TOUCHING THE ATTACKER WITH A STUN GUN.

Under no circumstances can you suffer a charge back to your own body, even if the assailant is holding you. The unit cannot be damaged by continued firing into the body of an attacker, but remember not to test fire into the air for more than one second at a time.

BATTERY INFORMATION: The Lil Guy Stun Gun should work right out of the box, but it is a good idea to have a full charge of at least 6-8 hours but no more than 8 hours. DO NOT overcharge the battery, this will shorten the battery's lifespan.

A fully charged battery should hold a charge for 3 months. If you use them often, then this will shorten the time that the battery stays charged.

Remember NOT TO OVERCHARGE THE BATTERY because this will shorten the battery's lifespan. Under normal conditions, the battery can be charged up to 900 times. 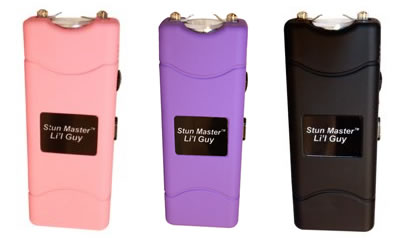