A flick baton is a telescopic expandable baton that fits in a small space, such as on a belt holster or in a purse. It is a collapsible baton that will be quickly extended by the flick of a wrist, thus the name. Once extended it becomes a formidable self defense device that can bring devastating results to a bad guy.

A Flick Baton is a Formidable Weapon 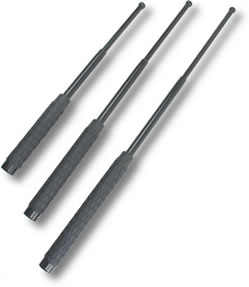 It is a good idea to receive training from a professional instructor in order to learn how to use this device in an effective manner. It is a very useful device for both offensive and defensive purposes that can be quickly applied to actual situations.

Telescopic or flick batons are now issued to most police departments instead of using the Billy clubs as they were formerly. The officer has a holster attachment on his belt where the baton fits and is easily accessible for immediate use. The batons will not collapse as they have a locking system. In order to collapse it, just strike it straight down on a hard surface.

The reason that the telescopic batons are so popular is that it provides the element of surprise and it gives the defender some distance between him or her from the attacker. It also packs a powerful striking force that will halt even the most stalwart of opponents. Most criminals know how devastating devices like this are, and will usually back down when they see one.

These batons can be used to jab, strike, and block. To open, the wrist is flicked quickly and the baton expands to its full size. In order to close, simply strike down on a hard surface and it closes. In addition to being used as a weapon, the baton can also be utilized to break windows or automobile glass, break into fire extinguisher boxes, and gain entry to structures.

The batons are made of solid steel and have an expanded range of 31, 26, 21, or 16 inches. They have a rubber covered handle to eliminate slipping of the grip.

It is vital to receive proper instruction for usage as it is considered to be a deadly weapon. Practicing the usage of the baton and understanding the safety rules are important.

A person must be age 18 or older to purchase the baton. For use as a self defense item, it is a very effective and powerful deterrent.