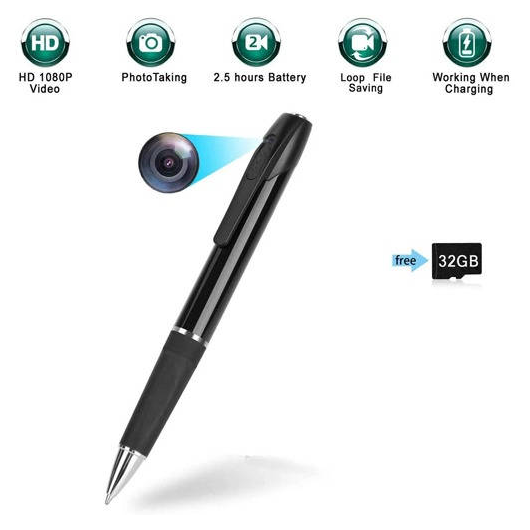 This spy pen is a self-contained system. This hidden camera contains a super small camera with a mini DVR to record all the action. It even writes like a normal pen. It has its own power and its own built-in video recorder. It will charge plugged into the wall or when plugged into the computer.

You do not have to be James Bond to have a hidden camera in your shirt pocket, recording all the action around you. Anyone, thanks to modern technology, can have fun with this Spy Pen, or have it handy for any situation that might arise.

The perfect camera for "body worn" application. Just click the top of the pen like you would any ballpoint pen to start recording. Can record for a full two and a half hours on a single charge. Recordings can be later downloaded via high-speed USB 2.0 to your PC for viewing and storing.

The HD hidden pen camera has a crystal clear 1080P video resolution and stores the footage on a 32GB memory that will store about 2.5 hours of video footage. The HD resolution ensures that your videos are smooth and clear even when there is a lot of movement. It's super easy to operate just one button operation.

Turn the pen on: click the button once to start recording and click it again to stop. When you are ready to watch your videos just plug the pen directly into the computer using the USB cable provided.

Imagine the fun you could have (since we assume you're not doing any espionage.) Discover the simple solution you'd have if you really needed to do some discreet recording.

This also makes a great gift, and most males between 13 and 53 would love one of these.

Put in your shirt or coat pocket and you get about 2 and a half hours of recording time per charge.

Records Video Only - No Audio

Conduct covert surveillance - These spy cams can be used for many covert situations. P.I.'s, Detectives, Under Cover ops.

Can also be used for fun!