The electronic watchdog uses radar technology to "see" through your front door.

When an intruder enters the area of protection, the alarm automatically begins barking like an angry German Shepard. From outside, it sounds like you have a very unfriendly canine inside.

With its radar eyes, the alarm can "see" through thick doors, walls, and glass.

The closer a person gets, the louder and more ferocious he gets. This lets those burglars or intruders know that the dwelling isn't empty.

Most criminals would try to find an easier home to break into rather than deal with a ferocious animal.

This type of alarm is even used to ward off and alert against bear intrusions. Bears do not like the sound of barking, especially when they can't see where it's coming from.

A black bear will generally shy away from a confrontation rather than engage in human contact...or an alert pup and a human.

Your new "pet" will monitor your door and will bark, ferociously if necessary, when an unexpected intruder approaches.

This preventative warning will alert you to the possible danger and also alert the bear or burglar that they need to stop and think about what they are doing.

You will get the time you need to arm yourself and/or call the police.

Police say a barking dog is an excellent way to deter burglars and this one never needs food, water, or to be taken for a walk. This is the ideal watchdog because he does what even the best living and breathing watchdog can't do.

He can "see" through thick doors, walls, and glass. And once his cord is plugged into any standard 110 VAC electrical outlet, he'll stay on duty around the clock, indefinitely. 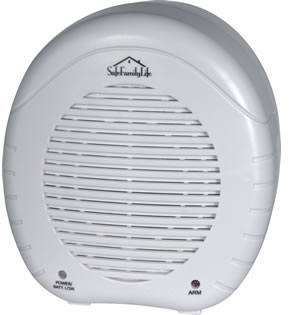 Choose any location indoors where you want to detect movement such as hidden behind the front door. Turn it on and your new pet begins sensing and detecting.

When movement is detected, he will alert you with the sounds you have chosen.

Choose from two settings: an alert sound of an angry and protective watchdog or a chime sound to alert you to a guest's arrival.

When in the alert mode, it begins to emit the ferocious sounds of a large, unhappy attack animal. The closer the intruder gets, the louder and more frequent the warning becomes.

As the intruder backs off, the fake barking decreases in intensity and frequency, stopping completely when movement is out of range.

Made by Safe Family Life, a leader in home security devices, this product never sleeps. It will bark angrily as an intruder approaches or play a nice chime to alert you to a visitor!

The included remote control lets you Arm and Disarm the system, as well as set off a Panic alarm.

Comment
After two break-ins, into our equipment bay, we knew we needed some security. Being in a rural area anyone who broke in would be long gone by the time security arrived. We needed on scene action. After installing the barking dog motion sensor we have not had a break-in. We installed a motion sensor at each corner of the building. When you walk by it now sounds like the dog is following you around the building. Bottom line is it is the best security and it saves on dog food.

Comment
The dog bark is for real. I would like the remote to do more than a single bark, i.e. simulate ALL the barks which happen as you approach the bark alarm.

Comment
Now, as for the alarm, I am very happy with it. It is loud
and seems to be doing a great job keeping the deer and
other pests out of our veggie garden and has stopped the
skunks, raccoons from digging in our lawn. I would
recommend it to any one.