What is an Electro Shock Weapon?

Today, they are commonly referred to as stun guns, TASER® devices, or stun batons. Before any of these 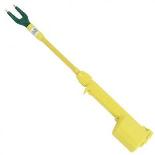 modern devices were made, the most well-known electroshock weapon was the cattle prod.

The cattle prod is a long baton type device with prongs at the end that deploys a high voltage, low amp electric shock. Ranchers and farmers use this prod to encourage stubborn cattle to move.

Since the cattle prod, other electro-shock devices, such as TASER® products and Stun Guns, have been developed and are used by police and civilians for non-lethal protection.

The TASER® electro shock weapon has two methods of use. The first is by installing a cartridge that contains two long thin metal wires with prongs at the end. When deployed, the wires shoot out to 15 feet and attach to the target, sending 50,000 volts of electric current down the wire. This overrides the body's muscular nervous system, which in turn causes the target to become incapacitated.

The second method is to use the TASER® device as you would a stun gun. When the cartridge is not installed, the trigger is depressed and an electric arc runs between the two electrodes or prongs. Using the TASER® gun in this manner requires the

offender to be touched directly, as opposed to being 15 feet away.

TASER® weapons are available to law enforcement agencies as well as to civilians. One difference in the models is that of the length of wire contained in the cartridge. Police models will deploy 21 feet away, while the civilian model deploys only 15 feet.

Police officers are using TASER® Devices more and more now as opposed to guns to subdue an out of control offender.

The use of these electroshock weapons may contribute to fewer deaths of alleged criminals than the use of guns. However, many human rights groups have that up for debate.

Probably the most popular of electro shock weapons are stun guns. There are many types of these devices available to the public, such as stun batons, those that are disguised as cell phones or pens, and many come with different features like alarms, flashlights, and disable pins.

Manufacturers claim the voltage of these stun devices to be anywhere from 100,000 volts even up to 5,000,000 volts. Although the voltage is high, these electro-shock weapons are still considered a non-lethal method of self defense because of the very low amps. Unlike the Taser® device, stun devices work by direct contact with the target.

This technology allows one to defend themselves by incapacitating a would-be attacker, but not killing them.

Not all 50 states have legalized the use of electroshock devices for civilian use. Some have even required a Concealed Carry Weapon permit. So, if you are shopping for a TASER® device, Stun Gun, or any other electro-shock weapon, you should check with your local law enforcement agencies for any restrictions before making a purchase.

For more information about police weapons or how a stun device works, Click Here.

TASER® is a registered trademark of TASER International, INC.