One of the most exciting things about going on vacation is getting to see new things and visit new places. Unfortunately for those who enjoy going to more isolated areas, sometimes the animals in these spots can cause problems. This is where our Mace Bear Pepper Spray would come in quite handy!

Mace Bear Spray contains 2.0% capsaicinoid concentration. The powerful Magnum fogger contains 260 grams and empties in 6 seconds, delivering an extreme blast that reaches up to 35 feet! This produces a formidable wall that has an immediate effect upon a charging bear.

Believe it or not, there are still several areas of the
country where bears can be a menace to tourists and residents.

While attacks are quite rare, they still happen in certain areas of the country. Even though only a handful of people are attacked each year, despite the hundreds of thousands of these creatures, this may not be a comforting statistic if you are confronted by one.

There are several schools of thought about what to do if you are confronted with one in the wild. Many people recommend lying down and playing dead, but most people disregard that as outdated advice. Some experts say that you should avoid making sudden movements, eye contact, or loud noises and stand your ground if he or she runs toward you.

On all almost all counts, however, the experts agree that bear spray is the best method of protecting yourself if you happen to come into close contact in a dangerous situation.

The reason that pepper spray is so effective against them is that their nose is unusually sensitive; far more so than the human nose. They may have very weak eyesight, but more than make up for it with their sensitive sniffers.

This means that when you spray and they breathe it in through their nose, it can have an immediate and devastating effect on them, giving you time to get away and get help. In addition, our Guard Alaska Bear Pepper Spray and this Mace brand are specially formulated to be effective against an attack and yet will not cause lasting damage to the animal.

Many national parks and recreational areas that have these wild animals living there strongly encourage visitors to have some form of spray with them simply because it is the most effective method of protection. Add a bear spray holster to keep it on your side for quick accessibility. With this canister of bear pepper mace, you can spray them from up to 30 feet away which will keep you out of harm's way.

Do not use this defensive option until you have no other choice, however, as you need to avoid angering them. Keep this product handy and follow the basic guidelines for outdoor safety. Preparing for a disaster can often prevent one.

How to Keep Bears Away

Learning how to keep bears away is smart preparation for any excursion into their territory. Park officials encourage you to carry around mace or pepper spray for protection. Although you hope that you will never use it, you should have it just in case. 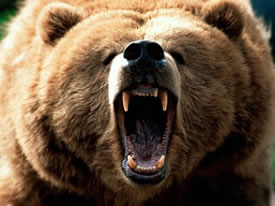 According to a spokesman for the Colorado Division of Wildlife, the spray is only as effective as its user is wise. Considerations such as wind direction and the speed of the approaching beast determine the best time to unleash the contents. If the wind is blowing in the wrong direction, you may be affected as well, so make sure you're downwind.

How to Keep Bears Away

Bear sprays are specially formulated and have a higher capsaicinoid concentration. Campers and hikers are advised to bring it, but camp rangers also recommend that making noise is also a good form of prevention. The animal may often avoid humans because of the noise that humans make. Banging pots together and yelling could be enough to make them go away.

Campers are advised to make noise whenever they go out of their tents or trailers. This is also applicable when hiking; especially where they are hidden in the brush or in the trees. You want them to hear you from far away so they'll avoid you.

Keep Food Away from Bears

Moreover, these animals will usually approach humans and other animals when they are looking for food. It is in these moments of foraging that we may be placed at our closest proximity. This is where people must be extra careful and exercise preventive measures.

For instance, campers are cautioned to keep their campsite free from trash and food in order to keep them from wandering in. If one is found already going through food containers, ice chests, and other places where food is stored, let him be. Never approach them or try to save the food – food, after all, can be replaced.

Pepper spray or not, it's never advisable to approach and put oneself at risk. Experts also warn people with sprays never to take chances simply because one has the spray to protect oneself. Any approach by humans could be seen as aggression, and they will respond accordingly.

When you come across a bear, stop. If it's an inadvertent meeting, he or she may simply want to go the other way. You can try to back away to give him space so he doesn't feel threatened. Keep facing him while you're backing away. If that doesn't work and he continues to approaches you, stand your ground.

Yelling, stomping your feet, blowing your whistle, and banging things together are all ways to use sound to discourage the animal from continuing. The loud sounds may confuse him or even frighten him enough to not want to deal with you. If he is intent on continuing his advance, it's time to point your spray toward him.

If you see the beast coming toward you, fire off a blast so that it has to walk through the cloud of pepper gas. If they are charging you, aim carefully and give a full blast so that an immense cloud stands as a barrier between you and it. Fire before they get too close so you can ensure the spray is in front of them. Once they walk into the fog of the bear pepper spray, he or she will be affected by it and you can make your getaway.

You can purchase a canister on this site. Choose between Guard Alaska brand or the Mace Brand Bear Spray at the top of this page.