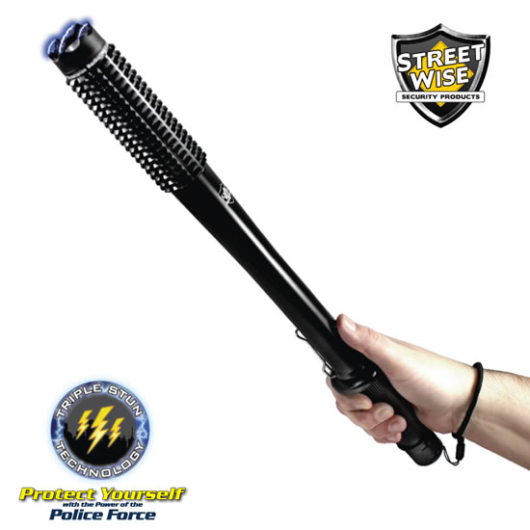 The Barbarian stun baton is sure to instill fear into those who will invoke its wrath. As one of the longer electric stun batons, the Barbarian definitely gives you the distance advantage when up against society's worst.

During ancient times, barbarians were known for being uncivilized, brutal, and fierce warriors.

"The Barbarian" is the perfect name for our newest stun baton. If Conan were alive today, we are sure this would be his weapon of choice. Even in our more refined culture, there are still modern-day "barbarians" who roam the streets.

When you arm yourself with this savage-looking Streetwise stun baton with its high-tech Triple Stun Technology, you'll be prepared to easily take down anyone foolish enough to attack you. We have combined a spiked baton with a powerful stun gun and blinding flashlight to create one of the most feared weapons on the market today.

Whether you leave it on your nightstand, in your car, or carry it with you on your belt with the metal clip, protecting yourself with the Barbarian is as easy as 1, 2, 3:

Comment
A little intimidating looking to walk down the street with. Need to remember to turn on switch in the base of the handle AND the thumb switch. This is nice for home defense in case of a break-in or if there is a problem with an intruder or animals in the backyard. Charge cord (9 inches) is ridiculously short!

Comment
Seems pretty sturdy. Its a bit long and not something you can carry inconspicuously - I might have to look for something a bit smaller to carry. But this will live in my car. The sound it makes is pretty intimidating and my dogs and cats scatter when they hear it. I pray I never have to find out how it works against an assailant, but it appears to have some good reach.