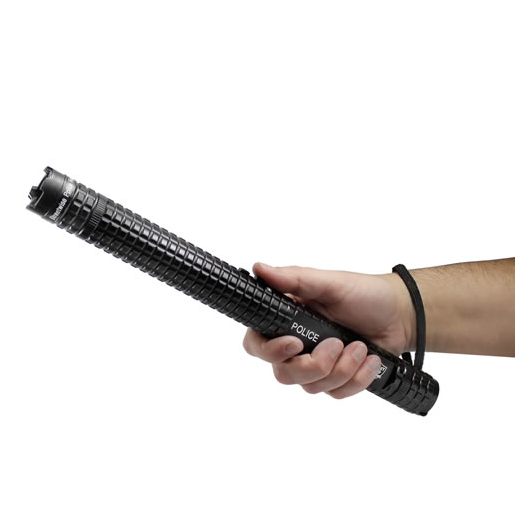 Blinding LED flashlight with 3 Light Modes: This is the strongest light we have ever seen built into a stun baton. It will not only safely illuminate the entire area at night but can also be used to protect you. When shined into the eyes of an attacker, the ultra-bright 150 lumen light can have a temporary blinding effect making it easy for you to immobilize them with the stun or strike with the metal baton.

Although this tactical stun gun flashlight baton is designed to meet the rigorous demands of the Military, Police, and other security professionals, it is also a great choice for regular people who want a great flashlight and peace of mind knowing they can effectively protect themselves with a top of the line defensive tool should the need arise. Whether you leave this stun gun flashlight baton on your nightstand or carry it with you in your car, protecting yourself is as easy as 1,2,3:

Identify the threat: An attacker will use the cover of darkness to sneak up on their victims and hide their identity. He'll also look for the most vulnerable victim. This powerful light beam shined in the direction of a possible attacker is often enough to persuade him to go in search of an easier target.

Disorient the Attacker: Shining the ultra-bright light directly into someone's eyes will cause disorientation and impaired vision for several seconds. The Police Force 12,000,000 Metal Tactical Stun Baton Flashlight boasts a super bright light beam with Self Defense Strobe that can disorient your attacker and give you time to flee. 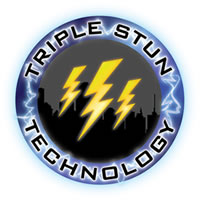 Triple Stun Technology: Most stun guns on the market today have only one or two points of contact. When using this model to defend yourself, the Triple Stun Technology (TST) allows an electrical charge to emanate between three separate points on the top of the stun baton (the two sides and the middle). This creates a larger stun radius, allowing you to defend yourself easily. Even when test fired, the loud and bright electrical burst is often enough to stop an attacker; if not, a jolt from this unit certainly will!

Blinding LED Light: Not only will the blinding flashlight safely illuminate the entire area at night, but it can also help to protect you. When shined in the eyes of an attacker, the ultra-bright light can have a temporary blinding effect making it easy for you to immobilize them with the stun gun or strike with the baton.

3 light modes: There are three light strengths (high, low, and strobe). When the situation does not require maximum light strength, the low setting can be used to extend the battery life. The strobe light mode can momentarily blind and disorient an attacker.

Long Reach: At 13.5 inches long this tactical baton is long enough to keep you a safe distance away from your attacker but short enough to carry with you easily.

Wall Charger: Whether at home or on the go, recharging the batteries is simple.

Comment
Great all-around product. Easy to use, hefty, intimidating. The crackle alone will solve most problems. Good price. It's not often something is as promised, and this baton was such.

Comment
This model comes with removable and replaceable batteries. They are rechargeable and the recharger is included with the purchase.