Solar Powered Dummy Camera made with a quality ABS plastic. The Dummy camera has a flashing red LED light and realistic appearance. The solar panel on the top of the unit will keep the rechargeable batteries charged so the unit will run 24 hours a day.

This unit will attach easily to the side of your home to give the appearance of a genuine security camera. Giving the impression you have a surveillance system installed on your home makes it less likely that a burglar will attempt to target your house.

They'd rather go after your neighbor's home who doesn't have cameras installed. Make it an easy choice for them by affixing one or more of these in plain view. At night, the red blinking dot will be a clear giveaway that this home is protected and should be avoided. 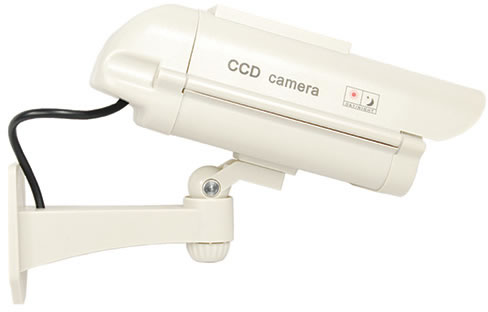 One great addition to your security system that criminals have no way to check is the fake security cameras that are now available. Some are just bare shells that look like a camera while others actually have rechargeable batteries and a built-in solar powered charger as well.

They mount exactly the same as a regular camera, except you don't have to run wires to your system if you have one. They have a built-in solar panel on the top that charges two AA batteries inside and the flashing red LED light will come on automatically each night when the sun goes down. In most cases, you'll have to buy your own batteries as they are rarely included.

The great thing about these dummy cameras is that they look absolutely real in every way possible. When you go online and read the customer reviews of the people that have purchased them, they are all in agreement that the cameras look as good, or better than the real cameras they already own.

Even If You Have A System, You Can Add Extra Solar Powered Dummy Cameras

If you already have a system, then you know that you had to pay dearly for each real camera and the installation to get it connected up to your system. These fake cameras can be installed in mere minutes anywhere you want and be a strong deterrent to any criminals hoping to gain entry to your home, garage or other properties.

When searching online, it seems that there are several types of these cameras available. Some have a complete LED ring where a real camera usually has infrared lights, some have just a single flashing LED light, and some are completely empty, just a housing that looks like a camera. Obviously, the cameras with some lighting will be a much better option to deter criminals.

Most of the purchasers mentioned that the fake cameras look as real or better than the real working cameras they had. Some even said that the housing was the same as a real camera. This would surely be good enough to fool a criminal in the dark that hasn't got the time to examine your security system up close. More likely, he'll leave and find an easier target where he's less likely to get caught and go to jail.