This might just be the most realistic cell phone stun gun on the market today! Most other models are big and bulky or look like phones that were popular 10 years ago. The "FRiPHONE" 14,000,000 looks just like a modern day smart phone. Although it is not a real one, you will be making the right call when you carry it to protect yourself.

At the first sign of danger, just get out your "FRiPHONE" and pretend to make a call. Any bad guy who gets too close to this "smart phone" will get the message loud and clear that you will not be a victim!

Discrete Protection: This is the most realistic cell phone stun gun on the market today. When you pull this out, your attacker will think it is a mobile phone. By the time he realizes it's not, it will be too late. This can give you the element of surprise that is often needed to defend yourself.

Powerful Stun Gun: Just test firing this unit into the air is often enough to stop an attacker. As the electric current pulsates across the top of the unit, it creates an intimidating electrical sound. An attacker with any sense will be stopped in his tracks. If the sight and sound don't stop him, a jolt from this unit certainly will.

Slim Design: At less than 5 1/2” tall and less than half an inch thick it is easy to conceal and light enough to take with you wherever you go.

LED Flashlight: The LED flashlight provides a convenient source of light whenever you need it.

Loud Alarm: The International Institute of Criminology says 68 percent of criminals will flee a crime scene if an alarm is sounded.

*Actual voltage output is difficult to measure and verify, but this unit compares to other brands that claim to be 14,000,000 or more volts. 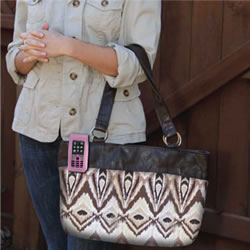 Stun guns disguised as cell phones are some of the most effective tools for self defense. First of all, they are very easy to use. No one needs prior knowledge or training to stick one against their assailant. Second, they are very effective, which is the reason why law enforcement officers favor police stun guns as a tool for non-lethal takedowns. Third, these types of products come in compact sizes that can easily be passed off for something else or concealed somewhere safe.

What makes a mobile phone such an amazing defensive tool is that people will never see it coming. People just treat these as a cellphone. It's not perceived as an immediate threat, which will make it difficult for attackers to get out of the way or deflect the attack.

Violence isn't something society tolerates, so as a means of self-defense, electroshock devices are one of the best tools you can have in your arsenal.