This dummy camera looks just like the real thing. Real housing without video recording. If you own a business or want to show some protection for your home, this dummy surveillance camera doesn't leave any question.

It's obvious and "in your face" and will make a thief think twice about burglarizing your home. Got some vandal kids running around causing mischief in people's yards? They'll skip over yours if they think they're being videotaped!

Large camera housing is obvious - you're not trying to hide anything here!

Put these at entrances, loading docks, corner of building viewing the front or back.

Blinking LED lets everyone know they are being watched.

Features authentic video cable, durable housing and can be used both indoors and outdoors.

Use with or without the removable Sun Shade. 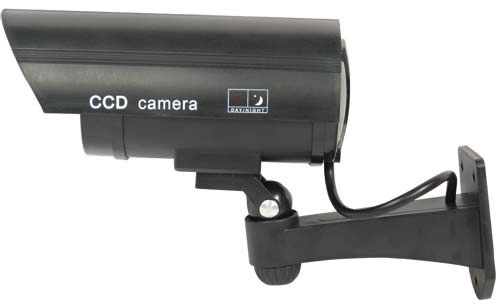 This is a bullet style IR Dummy Camera. It has a constant flashing red LED light. Its realistic looking can be mounted just about anywhere. It has an easy adjusting bracket so it sets up in minutes. The batteries are easy to change by just sliding the sunshade off and inserting 2 AA batteries (AA Batteries Not Included).

Surveillance cameras used in commercial and residential establishments have been a big help in solving many criminal investigations. Because they capture the exact scenario at a certain place and time, they can provide hints that are specific and constructive. However, for the budget-minded, installing a surveillance system may not be within their means.

An alternative is a Dummy Surveillance Camera. These are designed to look exactly like the real ones. They do not record video, however, since they do look genuine, they are an excellent deterrent. Time and again, they have been proven to lower the chances of incidents such as robbery, attacks, and vandalism.

These professional security items are easy to install, function with a blinking red LED, and are equipped with a fake power cable to make it even more convincing. The fake surveillance cam is enclosed in a weatherproof aluminum housing so it can be used either indoors or outdoors and also includes an adjustable metal mounting bracket. 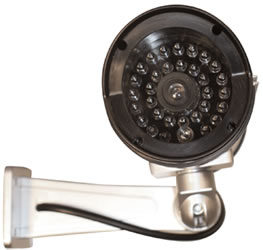 These dummy cameras are inexpensive, which makes it affordable even for those who just want to make some effort to protect themselves as well as the people and things that are of value to them. They may not function like the real ones but they have the ability to nip possible wrongdoing in the bud. The bottom line is that these have a preventive function minus the excessive spending.